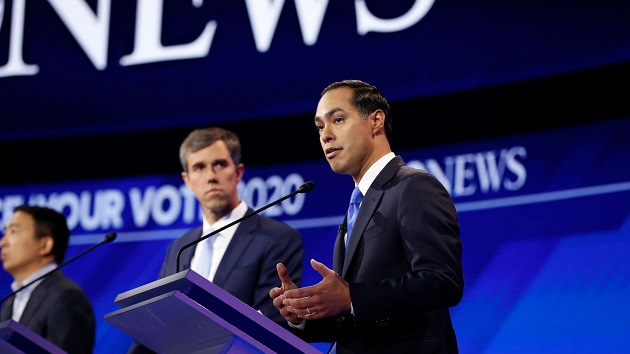 (HOUSTON) — During the Democratic debate on Thursday, Julian Castro got into a testy exchange with Vice President Joe Biden over their plans to make sure that more Americans are covered by health insurance — but he later insisted in an interview with ABC News he had not taken a shot at Biden’s age. The moment Thursday night came when Castro said that because Biden’s plan allows Americans to choose to participate, some 10 million people would be left uninsured. Here is the full transcript of that exchange: Castro: I also want to recognize the work that Bernie has done on this and, of course, we owe a debt of gratitude to President Barack Obama. Of course, I also worked for President Obama, Vice President Biden, and I know that the problem with your plan is that it leaves 10 million people uncovered. Now, on the last debate stage in Detroit, you said that wasn’t true and Senator Harris brought that up. There was a fact check of that, they said that was true.You know, I grew up with a grandmother who Type2 diabetes and I watched her condition get worse and worse. But that whole time, she had Medicare. I want every single American family to have a strong Medicare plan available. If they choose to hold onto strong, solid private health insurance, I believe they should be able to do that, but the differences between what I support and what you support, Vice President Biden, is that you require them to opt-in, and I would not require them to opt-in, they would automatically be enrolled.They wouldn’t have to buy in. That’s a big difference because Barack Obama’s vision was not to leave 10 million people uncovered. He wanted every single person in this country covered. My plan would do that. Your plan would not.Biden: They do not have to buy-in. They do not have to buy in.Castro: You just said that you just said that two minutes ago. You just said two minutes ago that they would have to buy in.

Biden: Your grandmother would not have to buy in if she qualified for Medicaid —Castro: Are you forgetting what you said two minutes ago? Are you forgetting already what you said just two minutes ago? I can’t believe that you said two minutes ago that they had to buy in, and now you’re saying they don’t have to buy-in. You’re forgetting that.Biden: You are automatically enrolled.Castro: It automatically enrolls people regardless of whether they choose to opt-in or not. If you lose your job, for instance, his, his health care plan would not automatically enroll you. You would have to opt-in. My health care plan would. That’s a big difference. I’m fulfilling the legacy of Barack Obama, and you’re not.Biden: That will be a surprise to him. Several minutes earlier, Biden did reference the necessity to buy in to his proposed plan. Here is the full transcription of that exchange with Senator Bernie Sanders:

Biden: Look, everybody says we want an option. The option I’m proposing is, Medicare for all — Medicare for choice. If you want Medicare, if you lose the job from your insurance company, from your employer, you automatically can buy in to this. You don’t have, no pre-existing condition can stop you from buying in. You get covered. Period. And if you notice, nobody’s yet said how much it’s going to cost the taxpayer. I hear this, large savings, the president — my friend from Vermont thinks that the employer is going to give you back if you negotiate as a union all these years, got a cut in wages because you got insurance. They’re going to give back that money to the employee?Sanders: As a matter of fact, they will.Biden: Well let me tell you something. For a socialist you got — For a socialist, you got a lot more confidence in corporate America than I do.After the debate, Castro told ABC News he did not regret the exchange and said “of course” he checked the transcript.“I wasn’t taking a shot at his age,” Castro said. “I was taking a shot at the fact that he had just said the words ‘buy-in.’”“It’s not an attack on Vice President Biden, It’s not something about the personalities. It’s about the health care policy – that was my focus,” he said.