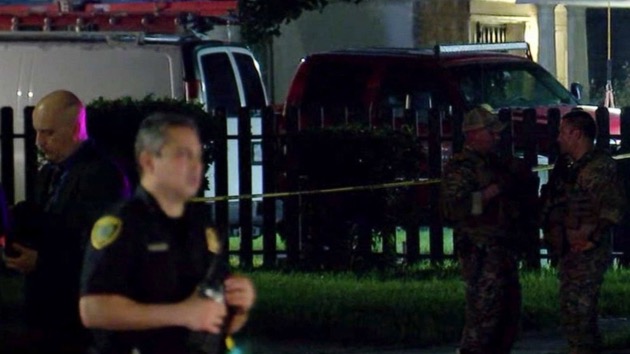 (HOUSTON) — A violent night of crime in Houston left one officer hospitalized, a suspect dead and three other people victims of separate robberies, including a priest who begged on his knees to be spared, police said.The officer, who was shot in his lower stomach Thursday night, is now in stable condition after undergoing surgery that lasted several hours, Houston Police Chief Art Acevedo said at a press conference Friday morning.The officer’s name has not yet been released, but police described him as a 29-year-old man who has been on the force for five years. His father is a 42-year veteran with the police department, Acevedo said.The suspect who was killed was shot by another officer who heard the shots fired and witnessed his fellow cop fall to the ground, according to Acevedo.The “acts of violence” began around 9:56 p.m. at a Valero gas station on Scott Street, according to police, when four suspects allegedly approached a man getting gas for his 2003 Chevrolet Tahoe and demanded he give them his vehicle at gunpoint.The man tried to explain that he was running on fumes and they wouldn’t make it far, police said, but the suspects still fled with the vehicle.Around 10:02, officers said they found the vehicle not far from the gas station and it appeared to have been abandoned because there was no gas.Police said after the suspects ditched the vehicle, around 10 p.m., they approached a priest in a nearby parking lot.”The priest has indicated that he was on his knees praying when one of the suspects pulled the trigger twice,” Acevedo said.The gun, however, did not discharge.Acevedo said the four suspects then beat the priest and stole his cellphone. When police were called to the scene, the priest gave the same description of the suspects as the first carjacking victim did.Shortly after that, the suspects allegedly approached a woman inside in her truck in her driveway and, at gunpoint, demanded she get out. The woman did so, and the suspects stole her vehicle, cell phone and purse, according to police.Officers were able to finally locate the suspects around at 10:21, prompting a chase.The officer who was shot chased one of the suspects for “quite the distance” before a struggle ensued and the shots were fired, according to police.Acevedo said he did not know the exact sequence of events, but it was possible that the officer was shot with his own gun. He described the night of crime as “chaotic.”

We have one of our officers who has been shot on the 3900 block of Tristan at Scott. He has been transported to @memorialhermann by @HoustonFire. Please pray for our officer. We also have one suspect down, others in custody and are looking for more. Please stay in hour homes.

Two of the four suspects — a 17-year-old man and 39-year-old man — are in custody. Charges for them will be announced at a later date, but Acevedo did not elaborate on the exact charges.Police are still searching for the fourth suspect.”We’re going to get you. We’re going to find you,” Acevedo said.He urged the suspect to come forward. Anyone with information on the shooting is asked to contact authorities.Copyright © 2019, ABC Radio. All rights reserved.