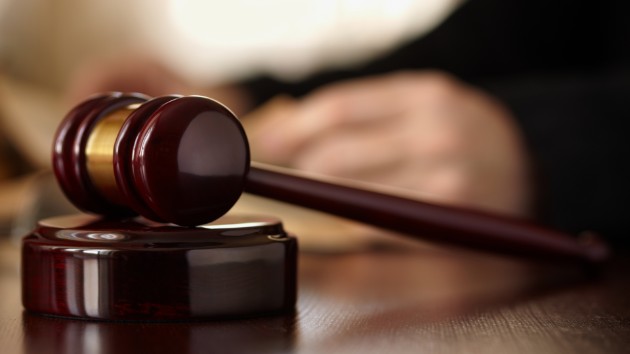 (BOSTON) — Desperate Housewives star Felicity Huffman has been sentenced to 14 days in prison for federal crimes stemming from the massive “Varsity Blues” college entrance scam.Huffman also will have to pay a $30,000 fine, complete 250 hours of community service and serve one year of probation.She is due to self-report to a yet-to-be-determined Bureau of Prisons facility Oct. 25.Huffman, 56, learned her fate Friday and issued a statement shortly thereafter, accepting the judge’s decision.”I accept the court’s decision today without reservation,” she said in the statement. “I have always been prepared to accept whatever punishment Judge Talwani imposed. I broke the law. I have admitted that and I pleaded guilty to this crime. There are no excuses or justifications for my actions. Period.”I would like to apologize again to my daughter, my husband, my family and the educational community for my actions. And I especially want to apologize to the students who work hard every day to get into college, and to their parents who make tremendous sacrifices supporting their children.””I have learned a lot over the last six months about my flaws as a person,” she added. “My goal now is to serve the sentence that the court has given me. I look forward to doing my community service hours and making a positive impact on my community. I also plan to continue making contributions wherever I can well after those service hours are completed. I can promise you that in the months and years to come that I will try and live a more honest life, serve as a better role model for my daughters and family and continue to contribute my time and energies wherever I am needed. My hope now is that my family, my friends and my community will forgive me for my actions.”Earlier this month, Huffman’s lawyers filed papers asking Talwani to not send the Oscar-nominated actress to prison, writing that “nothing about her history and characteristics require a prison sentence.”Huffman’s lawyers had asked Talwani to impose a one-year probation term, 250 hours of community service and a $20,000 fine. But federal prosecutors asked the judge to sentence Huffman to one month of incarceration, followed by 12 months of supervised release and a fine of $20,000.”She is remorseful — indeed, deeply ashamed — about what she did,” Huffman’s lawyers stated in court documents.On March 13, a federal indictment was unsealed with charges for 50 people, including Huffman and more than 30 other wealthy parents, in the largest college cheating scam ever prosecuted by the Department of Justice.The indictment alleges the parents paid bribes to William “Rick” Singer, a college-entrance tutor guru whom prosecutors identified as the ringleader of the nationwide scam, to get their children into elite colleges, including Stanford, the University of Southern California, Princeton and Georgetown.Singer, 59, who prosecutors said collected $25 million in bribes during the years-long scam, pleaded guilty in March to racketeering conspiracy, money laundering conspiracy, conspiracy to defraud the United States and obstruction of justice. He’s yet to be sentenced.Also indicted was actress Lori Loughlin — best known as Aunt Becky on the sitcom “Full House” — and her husband, fashion designer Mossimo Giannulli, who are fighting charges they paid Singer $500,000 to get their two daughters, Olivia Jade and Isabella, into USC as recruits for the university’s crew team, despite the fact they’d never participated in the sport.Huffman pleaded guilty earlier this year to charges of conspiring to commit mail fraud and honest service mail fraud and admitted that she paid Singer $15,000 to falsify her daughter Sophia’s SAT score.”I am in full acceptance of my guilt, and with deep regret and shame over what I have done. I accept full responsibility for my actions and will accept the consequences that stem from those actions,” Huffman tearfully said as she pleaded guilty in court on May 13.Thirteen other defendants also have agreed to plead guilty.Huffman’s lawyers presented Talwani with letters vouching for her character from the actress’ relatives, including her husband, actor William H. Macy, and former colleagues such as Eva Longoria, a fellow cast member on “Desperate Housewives.”Huffman and Macy later allegedly made arrangements to pursue the scheme a second time, for their younger daughter, before deciding not to do so, according to court documents. Macy was not charged in the scam.”To be sure, Felicity’s relationship with her daughters exploded on March 12th and rebuilding that relationship will be a long process. But I also want you to know Felicity has raised two amazing young women,” Macy wrote in his letter to Talwani.”After her arrest Felicity found a wonderful family therapist and we’ve all been going (in various combinations) for the last few months,” Macy wrote. “There is much to be done, and some of the hurt and anger will take years to work through, but we are making progress.”In court documents filed last week, federal prosecutors asked that Huffman serve time in prison.”Huffman’s conduct was deliberate and manifestly criminal: It was wrong, she knew it was wrong, and she actively participated in manipulating her daughter’s guidance counselor, the testing services and the schools to which her daughter applied,” prosecutors wrote in court documents filed last Friday.Prosecutors, according to the documents, argued that Huffman should serve time behind bars and that “neither probation nor home confinement (in a large home in the Hollywood Hills with an infinity pool) would constitute meaningful punishment or deter others from committing similar crimes.

SpaceX Dragon en route back to Earth, splashdown expected near Pensacola, Florida
Threats to judges are increasing, and experts say misogyny is a problem
Coronavirus updates: Lockdown in place as cases soar in Australia’s Victoria
Tropical Storm Isaias nears Florida coast before heading for the Carolinas
Vaccine companies searching for 1-shot dose of COVID-19 vaccine
Trump’s defiant campaign amid pandemic ramps up ground game, as Biden looks for another way