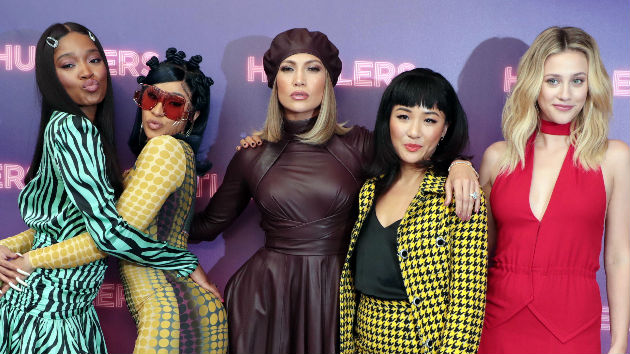 (NEW YORK) — After having a breakout year last year with Crazy Rich Asians, Constance Wu was ready to tackle something completely different. In the based-on-a-true-story film Hustlers, she plays Destiny, a stripper who joins up with a girl gang headed by Jennifer Lopez’s Ramona to fleece Wall Street big shots out of their cold hard cash.

Yes, there’s pole dancing and partying, but the movie — which co-stars Keke Palmer, Lili Reinhart and Cardi B — is also about the power of friendship.

“Deep down, [Destiny is] somebody who’s really lonely who just wants a friend and she finds this group of friends who are all different,” Wu tells ABC Radio.

In researching the film, Wu also became friends with a group of women who worked at strip clubs.

“[We] went out to dinner, hung out, and less in like interview format but more just as friends, just to get to know them as people instead of like, ‘Ooh, what’s it like to do this thing?’” Wu explains. “Because just like anything, it’s a job. You know, it’s like when people ask, ‘What’s it like being an actor?’ I’m like, ‘Love it, it’s great.’ But it’s not the idea of what you think it is.”

With an all-female core cast and mostly women behind the scenes as well, including writer/director Lorene Scafaria, Wu says being on the Hustlers set was an empowering experience. Instead of fighting for a seat at the table, Wu says they were “sorta making our own table.”

“And so it wasn’t competitive,” she adds. “It just felt like a sisterhood and felt like a project where we could all be ourselves.”

Pier 1 Imports files for Chapter 11 bankruptcy as it continues search for a buyer
Stacey Abrams ‘absolutely’ wants to run for president one day, but says she’d accept a VP slot in 2020
Alleged cop shooter with a ‘grudge’ indicted by grand jury
Samuel L. Jackson tapped to play a retired hitman in new feature film
‘Photograph’ star Kelvin Harrison Jr. explains why it was “amazing” to work with Issa Rae and Lakeith Stanfield in romantic drama
With a sneak peek release on its app, ‘Outlander’ season 5 is underway