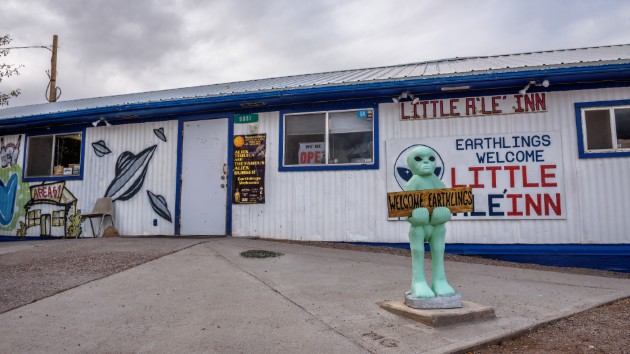 (NEW YORK) — The extraterrestrial-aficionado festival that promised to take Area 51 by storm has been cancelled by its own creators, but attendees still seem keen on going to “see them aliens.”Matty Roberts, the organizer of “AlienStock,” said he feared a “possible humanitarian disaster in the works,” noting he didn’t want to have a FyreFest 2.0 on their hands. Fyre Festival was supposed to be a luxury music festival but instead was was exposed as a scam that broke the internet with a sad piece of lettuce and sparked two documentaries about its fraudulent upbringing.“Due to the lack of infrastructure, poor planning, risk management and blatant disregard for the safety of the expected 10,000+ AlienStock attendees, we decided to pull the plug on the festival,” according to the website for the festival.“We just don’t want anyone to get injured or stuck in the middle of the desert,” it read.The “Area 51” event came to be after Roberts jokingly created the Facebook event “Storm Area 51, They Can’t Stop All of Us.” But the response was serious.More than two million people said they were going on Facebook to the classified U.S. Air Force facility in Rachel, Nevada, to “see them aliens.”Not all were expected to actually attend.Area 51 has long been a source of conspiracy theories involving extraterrestrial beings.Roberts, a 20-year-old college student, said they were disconnecting from Connie West, the owner of The Little A’Le’Inn in the town of 54 people, and the town itself.The inn was supposed to be the venue for “AlienStock,” located near the highly-classified government facility. West previously told ABC News she was expecting 800 to 1,000 people on her property.Despite Roberts’ announcement, the manager of the inn said they are still planning to go forward with AlienStock and people were still planning on coming.“We’re still gonna do our best to throw a sweet party and keep everyone safe,” Samantha Travis, the inn’s manager, told ABC News Wednesday.She said while some people have backed out since Roberts said the event was cancelled, others are still geared up and ready to go.“Just as many people that are backing out are still super excited,” Travis said.The inn has booked 20 musical acts and two comedians for the Sept. 19 to 21 festival, according to Travis.Roberts invited those planning on going to “AlienStock” to instead attend a party in Downtown Las Vegas for “an ‘out of this world’ gathering.”Travis is still urging people to attend their alien event.“You can go to Vegas anytime,” she said. “When are you going to go to a festival in the middle of the desert?”Copyright © 2019, ABC Radio. All rights reserved.