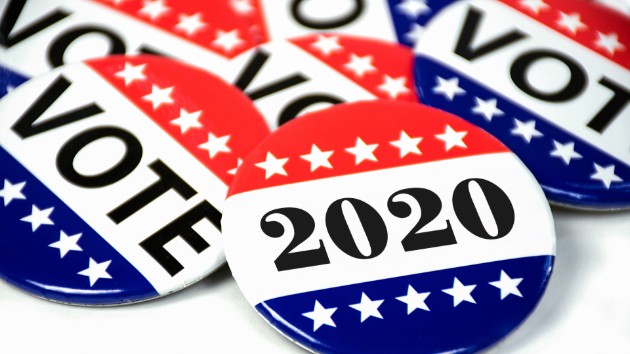 (NEW YORK) — Most Americans are cool with a female president, they’re just not so sure the rest of the country agrees, according a new poll. The results of the poll, conducted by LeanIn.org, a women’s empowerment organization, come ahead of the third Democratic primary debate, which will be hosted by ABC News on Thursday. The poll found that 53% of registered voters are either “very ready” or “extremely ready” for a woman president.That said, those same voters thought that the rest of the country was less ready than they are, which could have implications for how voters feel about the electability of a woman candidate. For instance, while 29% of respondents said that they themselves were “extremely ready” for a woman president, respondents thought that only 5% of most Americans were “extremely ready.” Similarly, 23% of respondents said they are “very ready” for a woman president, but only 11% of respondents thought most Americans felt the same.Respondents said that 39% of most Americans are “moderately ready,” while 30% are “slightly ready,” and only 16% are “not ready at all.” Rachel Thomas, the co-founder and CEO of LeanIn.org, told ABC News that the distinction between how individual voters feel versus how they think the rest of the country feels is important. “[Voters] are more likely to vote for a woman themselves, and in contrast, if voters don’t think that America is ready they tend to be less likely to vote for a woman themselves,” Thomas said of the results. Broken down by political party, Democrats are the most ready for a woman candidate — which should come as little surprise since they nominated Hillary Clinton as their party’s nominee in 2016.The poll found that 78% of Democrats said they were either “very ready” or “extremely ready” for a woman president, while 51% of Independents had the same feelings. Just under a quarter of Republicans, 23%, said they were “very ready” or “extremely ready” for a woman president. Thinking ahead to the 2020 general election, 58% said that it would be either much harder, moderately harder or slightly harder for a woman to win against President Donald Trump as opposed to a male candidate. About a quarter, 24%, said it would be much harder. Sheryl Sandberg, the COO of Facebook and the founder of LeanIn, said that the poll highlights important internal views. “It’s vital that we understand how biased thinking affects elections, so we can correct for it,” Sandberg said in a statement about the poll.There are currently five women running for the Democratic nomination in the 2020 race: Sens. Kamala Harris, Amy Klobuchar and Elizabeth Warren, Rep. Tulsi Gabbard and author Marianne Williamson. Two party nominees were women in 2016: Clinton and Jill Stein, of the Green Party. Thomas said that between those numbers, and the historic number of women elected in the 2018 midterms, there are clear signs of an upward trajectory. “I generally do think readiness for a woman president is going up in this country and I think it’s exciting,” Thomas told ABC News. “I do think we’ve been softening the ground and people are getting more comfortable with the idea of women in leadership positions in politics. There’s been amazing women leaders for years, but I do think we’ve seen some great progress over the past several years, and we don’t want to lose momentum,” she added. Copyright © 2019, ABC Radio. All rights reserved.