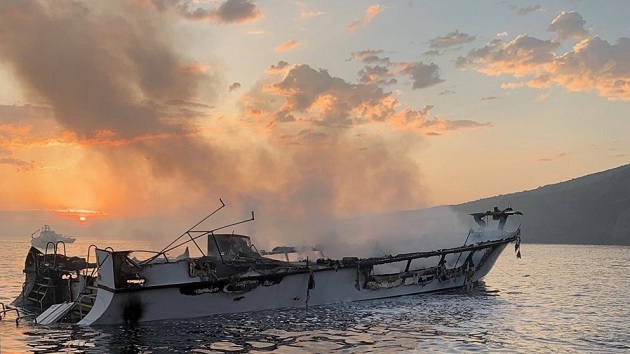 (SANTA BARBARA, Calif.) — Investigators executed search warrants Sunday on the headquarters of the company that operated the charter dive boat that caught fire on Labor Day and sank off the coast of Southern California, killing 34 people trapped by flames in the doomed vessel’s below-deck bunk quarters.A team of investigators from the FBI, the Bureau of Alcohol, Tobacco, Firearms and Explosives, the Santa Barbara County Sheriff’s Department and other agencies searched Truth Aquatics’ offices in Santa Barbara and the company’s two other boats, Lt. Eric Raney, spokesman for the Santa Barbara County Sheriff’s Department, told ABC News.The search warrants were served in conjunction with National Transportation Safety Board, which is overseeing the probe of the deadly maritime inferno that erupted aboard the triple-deck dive boat Conception.Details of the searches conducted Sunday at Truth Aquatics were not immediately released.NTSB officials are expected to release a preliminary report on the disaster as early as this week, officials said, but warned it could take up to 12 to 24 months to come up with a definitive answer on what caused the calamity.The Conception was on a three-day Labor Day weekend scuba diving excursion to the Channel Islands off the coast of Santa Barbara when a fire broke out and spread rapidly on the wooden-hulled boat in the early morning hours of Sept. 2.The ship’s captain and four crew members, who were on the top deck when the blaze erupted, jumped overboard and survived as flames blocked them from rescuing the trapped passengers and one crew member in the bottom-deck sleeping quarters, officials said.Santa Barbara County Sheriff Bill Brown said at a news conference last week that a stairway and an escape hatch in the sleeping quarters were blocked by flames.The bodies of 33 people who perished in the disaster were recovered by dive teams and are being identified through DNA collected from loved ones, officials said. One person killed in the incident remained unaccounted for on Sunday after the search was suspended on Friday due to rough seas.The search for the lone missing victim and efforts to raise the Conception from the ocean floor for a thorough inspection by investigators is expected to resume on Monday, pending weather conditions, officials said.U.S. Coast Guard officials said the boat, which came to rest upside down on the Pacific Ocean floor in about 65 feet of water was up-righted by crews before the salvage mission was suspended.The Santa Barbara County Coroner’s Office has positively identified 23 victims, who ranged in age from a teenage girl celebrating her birthday to a 62-year-old man who died along with his wife and three daughters.The victims were identified as Tia Salika-Adamic, who was celebrating her 17th birthday, and her parents, Carol Diana Adamic, 60, and Steven Salika, 55, all of Santa Cruz, California; Justin Carroll Dignam, 58, of Anaheim, California; Daniel Garcia, 46, of Berkeley, California; Marybeth Guiney, 51, of Santa Monica, California; Yulia Krashennaya, 40, of Berkeley; Alexandra Kurtz, 26, of Santa Barbara; Caroline McLaughlin, 35, of Oakland; Wei Tan, 26, of Goleta, California; and Ted Strom, 62, of Germantown, Tennessee.Other victims identified were Kendra Chan, 26, of Oxnard, California, and her father, Raymond “Scott” Chan, 59, of Los Altos, California; Andrew Fritz, 40, of Sacramento; Charles McIlvain, 44, of Santa Monica; Neal Gustav Baltz, 42, of Phoenix; Patricia Ann Beitzinger, 48, of Chandler, Arizona; and Vaidehi Campbell, 41, of Felton, California.Also killed were sisters Angela Rose Quitasol, 28, Evan Michel Quitasol, 37, Nicole Storm Quitasol, 31, their father Michael Quitasol, 62, and their stepmother, Fernisa Sison, all of California. Sison’s body has yet to be positively identified.Susana Solano Rosas, the mother of the three sisters, posted a heartbreaking message on Facebook.”My hopes were that Evan, Nicole, and Angela Rose were only injured. They were such strong swimmers. For sure they would have made it to land. They had only had 20 yards to swim. I was hoping we would be able to hug them and hold them. Instead we don’t have them,” Rosas wrote.She added, “We can’t bring them home yet. I know our children don’t belong to us. As parents, we have plans for their life. They had surpassed my expectations I had for them. I was so proud of them and their accomplishments. They each knew it, too. My three girls were very happy with their lives. They each had found their loves, were well established in their communities, with the best part of life ahead of them.”