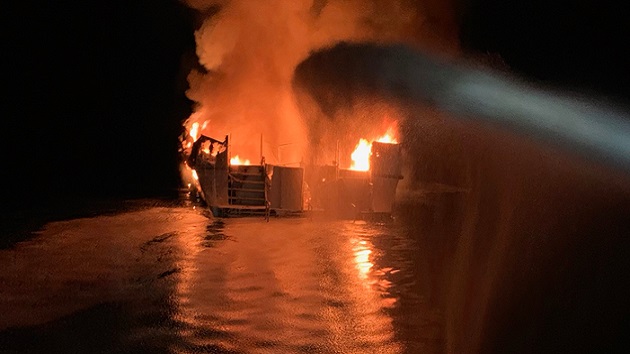 (SANTA BARBARA, Calif.) — Ventura County officials “fear numerous fatalities” as rescue operations are underway for a boat on fire near Santa Cruz Island, California, Monday morning, public information officer Bill Nash told ABC News.Currently, 34 people are unaccounted for from the fire on the 75-foot commercial diving boat, according to the United States Coast Guard. Five crew members were rescued on a good Samaritan pleasure craft called Great Escape.Captain Monica Rochester, U.S. Coast Guard Los Angeles Long Beach Sector Commander, said that the five crew members were awake at the time of the fire and jumped off of the boat into the water.Nash said that officials are hoping people went over the side of the boat and made it to Santa Cruz. However, the fire happened overnight, and the sleeping quarters were below deck. Nash said they “greatly fear loss of life here.”Crews from the Coast Guard, Santa Barbara Fire Department, Ventura County Fire Department and Vessel Assist responded to a mayday call that was heard at about 3:15 a.m.”The fire department crews were fighting the fire when the vessel sank 20 yards off shore in 64 feet of water,” according to the Coast Guard’s statement.”The vessel was reported as being on fire,” the Los Angeles office of the U.S. Coast Guard tweeted earlier Monday. They added that “a group of crew members has been rescued (one with minor injuries) and efforts continue to evacuate the remaining passengers.”Rochester said the vessel was in “full compliance.””We are working deliberately with the vessel owner/operator, who is with us at the time working on a plan to conduct further assistance for his vessel,” she said.The Ventura County Fire Department public information officers said in a tweet that their department responded to the fire at about 3:30 a.m. They said the Coast Guard is “helping support rescue operations for people aboard a dive boat.”The boat was drifting toward Santa Cruz Island, per the Santa Barbara Fire Department, and it was anchored when the fire started to burn. It currently has a portion of the bow sticking out of the water, per the Coast Guard.

Rochester said that the teams are actively conducting search and rescue efforts.