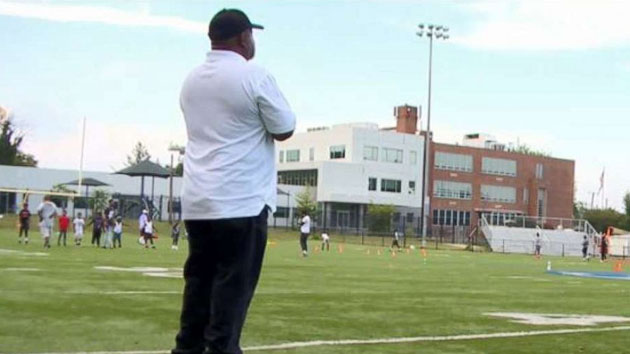 (WASHINGTON) — Steve Zanders, head coach of the Woodland Tigers youth football team in southeast Washington, D.C., has seen a lot in 35 years of coaching.The thing he’s probably most tired of seeing is gun violence — and how it’s destroyed the futures of so many of his players.In 2001, Zanders had 19 players on his Pop Warner community football team. Today, only nine remain. Seven are dead, and three in prison.The championship-level success they earned as youths earned community fame but also put targets on their backs.”We end up winning the D.C. championship. It was a brotherhood,” said Adam Madden, a player in 2001. “My friends were getting killed. So many people was getting killed at a young age. That it was so unreal …14 years old getting killed, 15 year old get killed, 16 years old.”Youth in the community still face the threat of gun violence daily, and even with the national push for background checks, Zanders wonders if that will be enough.As of Aug. 30, there have been 114 homicides in Washington. And D.C. has strict gun laws. Police there estimate they’ve recovered 6,000 illegal firearms in just the past three years. D.C. does not honor concealed carry reciprocity laws from other states, nor does the city allow open carry.Just last month, Zanders attended more funerals — 11-year-old Karon Brown was killed at a local McDonald’s, and the following week his assistant coach also died in a drive-by — and the coach has had enough.”I’m just tired of going to them,” he added.By day, Zanders is a federal government employee. He volunteers his time to keep the football program going.”Back in the 80s, when I started, I had funding from the District government. I was able to keep the kids doing something positive,” he recalled.Now the coach said he has just enough money to run a modest summer program at best. The Woodland Tigers have boys ranging in age from 5 to 15 from surrounding communities.”Why are 11-, 12-, 13-year-olds carrying guns? And you’re supposed to be 21 with a background check to buy them?” he said.Many of the guns that end up in Washington are from parts of Virginia and North Carolina.Zanders wants the illegal gun off the street.”14-year-olds with AK-47s? Assault rifles? How are these guns getting in our community?” he said.Sen. Pat Toomey, R-Pa., and Sen. Joe Manchin, D-W.V., proposed a bipartisan bill that would require universal background checks for gun owners and merchants, beginning in September. Amid the national conversation on gun reform, Zanders fears his community will go unnoticed — even just miles from where those laws are made.”Gun violence is in their backyard but not at their doorstep,” Zanders added.Parents in the neighborhood said they appreciate what Zanders has accomplished — that he’s been a pillar in the community, personally recruiting all of his players.Alalim Musawwir’s three sons have been playing for the Woodland Tigers for the past four years. She said the team gives local families the chance to bond and face common threats together.”Everything,” she added, “starts with being a parent first, to be proactive in the child’s life.””Being a part of Woodland helps me outside of school because it teaches me discipline,” said her son Larry, 13. “Like how to listen to grown-ups or school.”Despite the losses the team has endured, the team stands strong. It’s still an outlet for children who may not clearly see all of the dangers around them.Madden now has a son of his own, and he knows what that boy is up against.”I’m so tough on my child,” he said. “Like my mother she was on me.”Copyright © 2019, ABC Radio. All rights reserved.