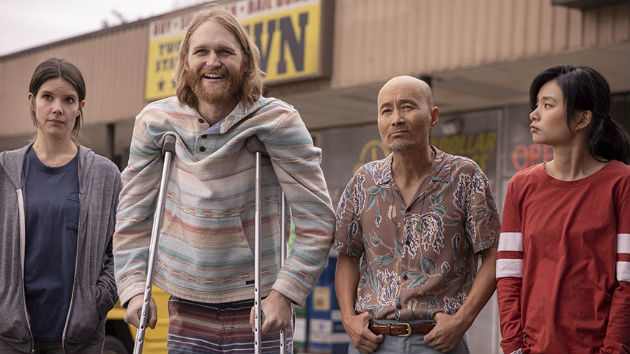 (NEW YORK) — Season two of AMC’s Lodge 49 is rolling on, as fans continue to explore the the quirky sensibilities of the show — and its titular location.

In broad strokes, Lodge 49 stars Wyatt Russell as Sean “Dud” Dudley, an eternally optimistic surfer and former pool boy who stumbles across a ring that leads him to a mysterious, forgotten Elks-type club. When he’s welcomed into the building, it changes his world.

Sidelined from surfing by a snakebite that still haunts him, Dud is at first lured by the club’s bar — but he comes alive unraveling the mysteries within its walls — and its members.

“The true star of the show is the Lodge, right?” Russell tells ABC Radio “[B]ut all of the people in it are really just as important to the machinations and moving parts of how the Lodge works, and what people mean to each other.”

Of those co-stars — who include Cheech Marin, Celia Au, Brian Doyle-Murray, newcomer Sonya Cassidy, and Brent Jennings — Russell says, “It’s really special to work with people who are, A) Just talented, but also people who really get life in a way where they realize like nothing’s the end of the world.”

“And that’s…how I feel like most people are on the show, and it makes it really a special work experience, because it’s the number one thing people want to do…I think everybody wants to have a good time, you know?”

You can catch up with the first season on Hulu and watch episodes on AMC online. Lodge 49 airs Monday nights at 10 p.m. ET.