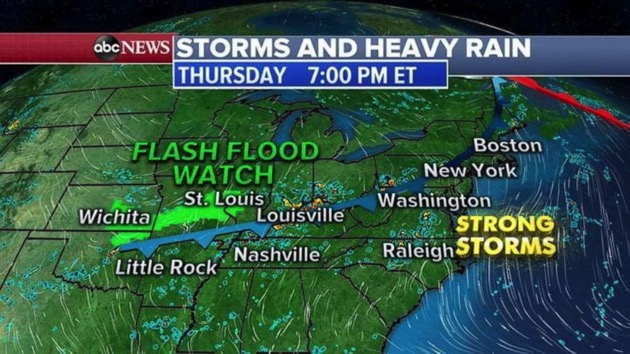 (NEW YORK) — A large area of the country will see strong storms continuing Thursday with possible flash flooding in areas all the way from Oklahoma to Maine.Flash flood watches are currently in effect for four states including Oklahoma, Kansas, Missouri, and Illinois Thursday morning where some areas have already seen up to 5 inches of rain.Later Thursday afternoon and evening the cold front that has been the catalyst for the storms in the Plains will move to the East Coast with strong storms and damaging winds from Maine to the Carolinas including Boston, New York City, Washington, D.C., and Raleigh.Strong storms are also possible in the Ohio Valley Thursday where some areas could see heavy rain and possible flash flooding.Heavy rainfall totals are expected from Arkansas to the Carolinas for the next 48 hours with some areas expecting more than 4 inches of rain.The heat wave in the South is finally going to subside Thursday due to the cooling thunderstorms that are forecast for Thursday afternoon. All heat alerts across the region have been dropped.The only heat alerts left in the East are in New York City and New Jersey where the heat index could reach the mid-90s by this afternoon.In the West, several cities reached record highs yesterday including 114 Fahrenheit in Phoenix and 110 in Tucson.The record heat, dry conditions and lightning helped to spark severe brush fires in Arizona and forced the closure of Interstate 17.But the record heat will subside a bit in most of Arizona today while further north the National Weather Service issued red flag warnings for high fire danger in Utah, Wyoming, and Colorado due to gusty winds.Copyright © 2019, ABC Radio. All rights reserved.