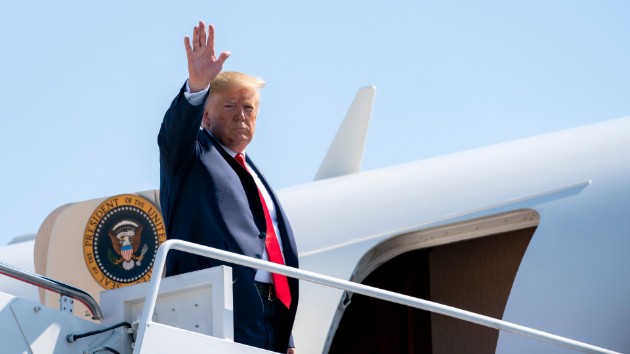 (WASHINGTON) — President Donald Trump on Wednesday hit back at Denmark’s prime minister for calling his idea about the U.S. buying Greenland “absurd,” blasting her comment as “nasty” and accusing her of “blowing off the United States.”Trump spoke after abruptly cancelling his planned visit to Denmark via Twitter Tuesday night.”I looked forward to going but I thought the prime minister’s statement that it was ‘absurd,’ that it was an absurd idea, was nasty,” he told reporters as lef the White House for a trip to Kentucky. “I thought it was an inappropriate statement. All she had to do was say, ‘No, we’re not interested."”He said the prime minister spoke “in a very sarcastic, nasty way.” “Don’t say what an absurd idea that is,” Trump said. “She’s not talking to me, she’s talking to the United States of America.”He said they would still meet sometime in the future, though.”We’ll do it another time,” he said.Trump mentioned Harry Truman as having the same idea, saying it’s been talked about “for years.” Trump said, for him, it was “just an idea, just a thought.””I thought it was not a nice statement, the way she blew me off, because she was blowing off the United States,” Trump said.Earlier Wednesday, Denmark’s prime minister said she was “disappointed and surprised” that Trump had called off his visit.The White House had said that Trump would travel to Denmark and Poland over the Labor Day weekend, but Trump wrote in a tweet Tuesday night that he would postpone the Denmark leg after Frederiksen dismissed his suggestion that the United States was interested in purchasing Greenland.”Based on Prime Minister Mette Frederiksen’s comments, that she would have no interest in discussing the purchase of Greenland, I will be postponing our meeting,” Trump tweeted.Frederiksen has previously rejected the possibility of selling Greenland to the United States. Greenland is a autonomous territory of Denmark.The prime minister on Wednesday again rejected the idea of selling Greenland and said the issue should not serve as a distraction.”This does not change the character of our good relations, and we will, of course, from Denmark, continue our ongoing dialogue with the U.S. on how we can develop our cooperation and deal with the many common challenges we are facing,” Frederiksen said. Trump was slated to meet with Denmark’s queen during his trip, and on Wednesday, a spokesperson for the Danish royal household told ABC News the household was “surprised” by the trip cancellation. The spokesperson would not comment further.It seems that the cancellation took the U.S. ambassador in Copenhagen by surprise, too. Just hours before Trump’s tweet, Ambassador Carla Sands tweeted, “Denmark is ready for the POTUS @realDonaldTrump‬⁩ visit!”Sands later followed up in a second tweet Wednesday to say Trump “values and respects” Denmark and “looks forward to a visit in the future.” The State Department referred questions about the cancellation to the White House, but defended Sands, saying her tweet “goes to show the strength of the relationship that our ambassador has with the government, and we continue to work together.””I think it’s sad, honestly, because this is just not the way you treat an ally,” Rufus Gifford, who served as U.S. ambassador to Denmark during the Obama administration, told CNN. And to cancel the trip in this way is just a shame. It’s absolutely a shame.”Trump has cancelled overseas trips or stops before.He nixed a trip to Davos, Switzerland, in January, citing the partial government shutdown in the U.S., and cancelled stops in Peru and Colombia in April 2018 to deal with a Syrian chemical weapons attack.He also called off a planned trip to London to inaugurate a U.S. embassy complex in January 2018, saying he was unhappy with the Obama administration’s sale of the previous embassy building. And he reportedly cancelled a stop at Israel’s Masada in 2017 because he could not land a helicopter atop the mountain fortress.

House committee probing Jan. 6 attack could subpoena Trump aides: Sources
COVID deaths surge in Alabama, after state reports more deaths than births in 2020
Gabrielle Union calls out Hollywood’s pay disparity among actors of color
Brian Laundrie search ends for day after finding ‘nothing of note’: Live updates
Nicole Kidman reflects on her marriage to Tom Cruise: “I was young”
Elizabeth Holmes criminal trial dominated by allegations of deception and intimidation from those who worked for her