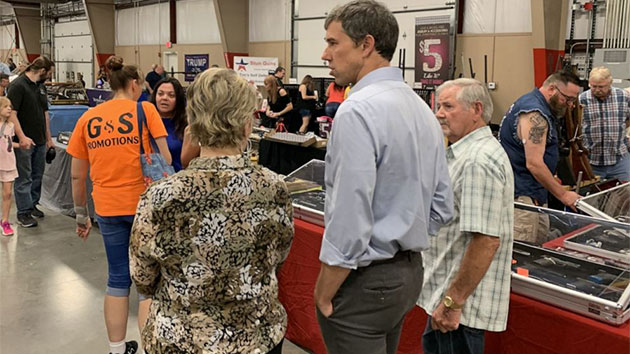 (NEW YORK) — Two weeks after his hometown of El Paso was the site of a mass shooting, 2020 presidential hopeful Beto O’Rourke made an unannounced visit to a gun show in central Arkansas to speak with gun buyers and sellers about what can be done to stop gun violence in America. O’Rourke, who was in between campaign events in Arkansas on Saturday, paid $10 to enter the event, and walked through aisles lined with handguns, AR-15s, stun-guns, hunting rifles, scopes, magazines and knives before striking up a conversation with Preston Linck, who was selling handguns and rifles.Linck, who later said he doesn’t identify with either political party, supports closing the so-called gun-show loophole and requiring background checks for all gun sales.”I have tables here, but there’s no background check,” Linck told O’Rourke, a former Texas congressman.O’Rourke asked him whether Linck would accept a requirement that gun-show sellers like him get a federal firearms license, and Linck responded he would. “Just the only little problem I see, there’s so many guns out there, even if you tried to stop selling, they’re already out there,” Linck told O’Rourke.But he was skeptical of a proposal O’Rourke made a few days ago — a mandatory assault weapons buy-back because he doesn’t think people would willingly participate.Larry Beaver, another attendee at the show and a self-described Republican Trump supporter, said he owns many firearms, including assault rifles.”If you want votes, you’re not going to get them by talking about taking this away from people,” Beaver told O’Rourke. “People are going to find a way to kill people.”O’Rourke said he is not anti-gun, that he learned to handle a firearm growing up from a sheriff’s deputy and has handled an assault weapon. But he wants weapons of war out of the hands of the public and to find ways to prevent rampages like the one in El Paso on Aug. 3, when a man opened fire at the El Paso Walmart killing 22 people and wounding two dozen more.The El Paso shooting, along with another mass shooting that same night in Dayton, Ohio, that left 10 people dead, and a third incident this week in Philadelphia, where a gunman fired a barrage of bullets at a crew of police officers, injuring six of them, has led to a renewed call to both limit the number and variety of firearms in the country, and increase safeguards that could help keep guns out of the hands of would-be criminals.The shootings have also meant that the issue of gun violence has taken center stage in the race for president. Candidates have called on Republican Senate Majority Leader Mitch McConnell to bring senators back from their August recess to vote on a background check bill that the Democrat-controlled House passed earlier this year. At least six candidates have also added to mounting pressure on Walmart, one of the nation’s biggest gun sellers, to take guns off its shelves until a series of safeguards, including a ban on assault weapons, has been put in place.O’Rourke, who rushed back to his family in El Paso after the attack, has since vowed to reboot his floundering presidential campaign and seek out tough conversations with voters across the country about immigration, gun violence and racial divisions.”Those places where Donald Trump has been terrorizing and terrifying and demeaning our fellow Americans, that’s why you will find me in this campaign,” he told a group of supporters on Thursday in El Paso. He then headed to an area outside Jackson, Mississippi, where federal agents last week rounded up about 680 people accused of violating immigration laws.Their political differences aside, Beaver said he told O’Rourke, “I respect you for talking to me.””I saw him walk by and said ‘wow what’s he doing here?” Beaver said as he recounted their conversation.He even said he might be willing to support O’Rourke’s assault weapons buy-back plan — so long as he got a fair rate and “the rest of America takes a part in it” too.For his part, O’Rourke told ABC News, he felt he “learned something by listening to him.””We’re not going to get this done until we include everyone in this conversation,” O’Rourke said. “You’re never allowed to write anybody off because they’re a Republican, because they’re a gun seller, because they’re at a gun show.”

‘The Connors’ dedicates live season four premiere to Norm MacDonald
Mom dying of ovarian cancer shares what she wants women to know about the deadly disease
Jada Pinkett Smith celebrates 50th birthday on ‘Red Table Talk’; ABC to adapt Baratunde Thurston’s ‘How to Be Black’
Ray J responds to rumors of a second sex tape with Kim Kardashian: “This ain’t cool”
Is It Time To Go All-In On The Raiders?
Billy Porter reveals why he wants to say “thank you” to Elizabeth Taylor