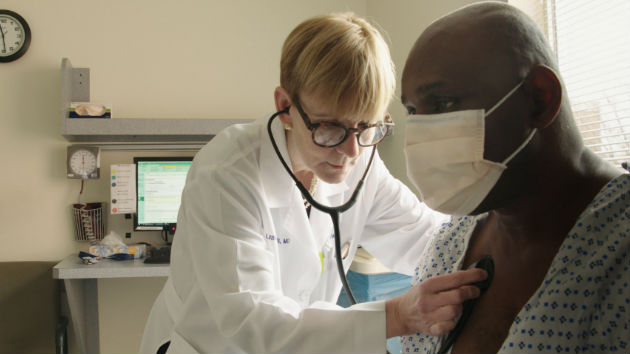 Courtesy of Netflix
Posted on August 16, 2019 by ABC News

Diagnosis, a docu-series debuting today on Netflix, takes patients straight out of Sanders’ column and opens them up to the power of crowdsourcing in order to determine the elusive causes of their mysterious illnesses.

“Some of the time, it’s not like a math problem. It’s Sherlock Holmes,” Sanders says about certain medical cases. “It’s a mystery story…Clues have to be followed up and you have to have suspects and red herrings and all that kind of stuff, and I loved that.”

The first episodeof Diagnosis features a young woman with unexplained debilitating muscle pain.  Other patients include a six-year-old girl with localized seizures and a man who experiences deja vu before passing out.

Diagnosis isn’t the only show out right now that’s using a crowdsourcing method to try to get people well. Ann Curry hosts Chasing the Cure, a live medical mystery show airing on TNT and TBS. Does this mean crowdsourcing could be the future of medicine?

“I hope not,” Sanders laughs. “That would put me out of a job! But I think for patients, it already is. I mean, that future is already now.”

In addition to the Netflix series, Sanders’ new book, a collection of some of her best columns, Diagnosis: Solving the Most Baffling Medical Mysteries, is out now.

A special Bond: Daniel Craig named honorary commander in the Royal Navy
Gabourey Sidibe shares the special connection she has to her new podcast thriller ‘If I Go Missing the Witches Did It’
A century after arson decimated its Chinatown, San Jose to apologize for past racism and injustices
After people spoke out about COVID-19 vaccines and period changes, research is underway
Tony nominee Katori Hall shares what she’ll do with her award if she wins on Sunday night
Billy Bob Thornton and Tania Raymonde on bringing ‘Goliath’ to a close with new fourth season