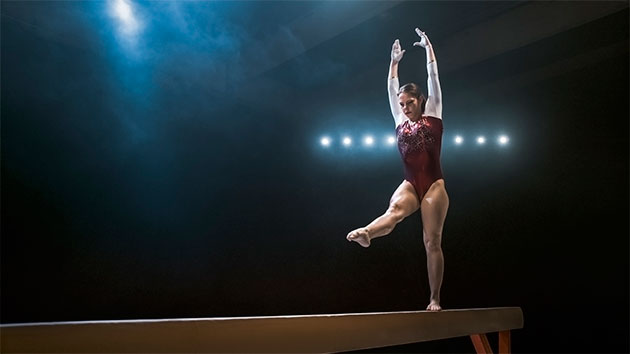 (KANSAS CITY) — Simone Biles made history this weekend, becoming the first gymnast to ever attempt, and land, a so-called “double-double” dismount on the balance beam at the 2019 U.S. Gymnastics Championships in Kansas City, Missouri.The four-time Olympic gold medalist’s remarkable double-double maneuver involved a double twist and double somersault as she dismounted from the beam.The 22-year-old was all smiles as she landed her history-making feat.

— Team USA (@TeamUSA) August 10, 2019 “I’m really happy with the beam dismount and how it’s come along, because if you had asked me after [U.S. Classic] if I was going to complete it, I would’ve said no,” Biles told Team USA at the competition. “I feel like in those short two weeks we did a lot of work on a couple of the events, so I’m pretty excited with how it turned out.”If she successfully completes the feat at an international meet, or at the 2020 Olympics next year, the skill will be named after her.Biles also became the first female gymnast to attempt a triple-double (two flips and three twists) during her floor routine at the competition, however, she fell forward as she landed.This year’s U.S. Gymnastics Championships has courted controversy in the wake of a massive sexual abuse scandal that has come to light in the past year and a half involving the disgraced, and now imprisoned, sports doctor Larry Nassar.Biles, and hundreds of other gymnasts, have publicly accused Nassar, a former USA Gymnastics national team doctor, of sexual abuse.”It’s hard coming here for an organization and having had them fail us so many times,” Biles told reporters in the Sprint Center arena in Kansas City, Missouri, late last week.Copyright © 2019, ABC Radio. All rights reserved.