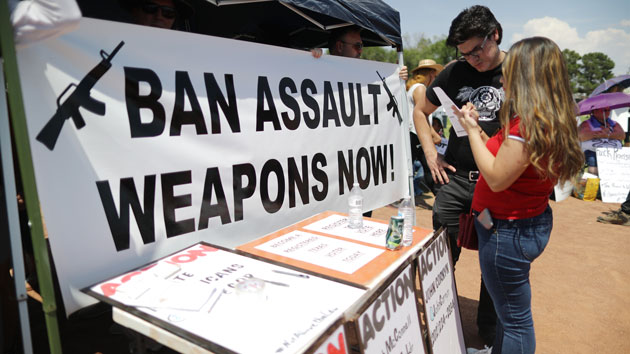 (EL PASO, Texas) — Latino activists held a rally to demand action from Texas lawmakers one week after a shooting at an El Paso Walmart killed 22 people and injured dozens more.Members of the League of United Latin American Citizens, which considers itself the nation’s oldest and largest Latino civil rights organization, marched Saturday in Dallas to call for Texas Gov. Greg Abbott to hold a special session on strengthening gun regulations.On Aug. 3, a gunman allegedly targeted the Walmart in El Paso because it is frequented by Mexicans who cross the border to do their shopping there, according to police.”Both the El Paso, TX shooter, and the Dayton, OH shooter, who massacred nine people mere hours after the attack in El Paso, purchased their weapons legally in Texas,” a press release from the organization stated, referring to the second of back-to-back mass shootings that drew renewed calls for gun reform. “LULAC is demanding that Governor Abbot pass stricter gun legislation to protect fellow Texans and prevent mass shootings fueled by hateful, racism animus.”At the demonstration, attendees held white crosses and signs that said “No Hablamos Hate” and “Hate Will Not Replace Us” as they chanted phrases such as “This is what America looks like” and “El Paso is strong.”Domingo Garcia, president of the activist group, said the El Paso massacre was a result of the “hate rhetoric … racism and bigotry that we’re seeing in our political discourse in this election year.”On Wednesday, President Trump visited both cities and met with victims of the shootings and their relatives, local politicians and first responders. Despite calling for unity, however, he still lashed out at critics.In El Paso on Saturday, 2020 presidential hopeful and former Texas Rep. Beto O’Rourke marched with the activists, describing the community as “one of the safest cities in the United States” full of “beautiful people who will not allow this act of terror and hatred and violence and racism to define” them.”Instead, it will be all of us who decided to stand up, to be counted, to overcome this, to show the rest of the world who we are,” he said.Copyright © 2019, ABC Radio. All rights reserved.