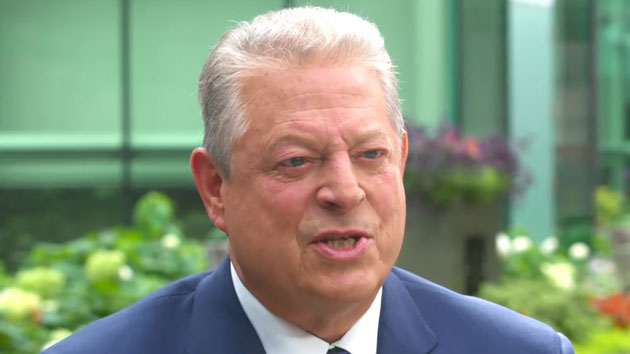 (WASHINGTON) — Former Vice President Al Gore called for unity and urgency in the American response to climate change, saying he was encouraged by growing climate activism around the world, but alarmed by what he said is the imminence of irreversible, continuing environmental damage.”There’s both bad news and good news,” he said in an interview with ABC News Chief White House Correspondent Jonathan Karl. “The problem’s getting worse faster than we are mobilizing to solve it. However … we now have an upsurge in climate activism.”Gore acknowledged that climate change is “a global crisis that requires a global response,” and that to be successful, climate policies require international cooperation. But he held that the U.S. has a responsibility to facilitate this cooperation.”The United States of America — and only the United States of America — can provide the necessary leadership to rally nations around the world to do the right thing,” he said.And with Democratic primary voters ranking climate change among their top five issues, 2020 candidates have made addressing it more central to their campaigns. Gore said on “This Week” that while he would not comment or advise on specific candidate’s plans, he felt encouraged that the issue has become more of a political priority for Democrats.”I would always like to see more time devoted to it,” Gore told Karl. “But I have to say, yes I think that it’s great that there are so many of these candidates who are really making it their top priority and who are really focusing on introducing bold plans.”For the Trump administration, however, the approach to climate change has included rolling back environmental protection policies, including those implemented under President Barack Obama, from repealing Obama-era regulations on methane in September 2018 to relaxing safety measures on offshore drilling in May. In 2017, Trump announced his intention to pull out of the landmark Paris climate agreement, saying it crippled American job growth and manufacturing.Gore met in December 2016 with then-President-elect Donald Trump for a conversation on climate change and the Paris Accord and in the interview with “This Week” that he was hopeful before the meeting that even under a conservative administration, there could be progress made on climate policy. More than two years later, however, he said that were he to meet with Trump again, he would do so, “without any expectation of reasonableness or responsiveness.””I did think at the time that there was a chance he might change on climate when presented with the facts,” Gore said. “I was clearly wrong about that… He doesn’t want to change on it.”In the same interview, Karl asked Gore about the possibility of impeachment proceedings against Trump. The Judiciary Committee, led by Rep Jerrold Nadler, D-N.Y., is investigating whether to recommend articles of impeachment for what Nadler has said is “the obstructive conduct described by the special counsel.” Gore, during his vice presidency in the Clinton administration, saw impeachment proceedings from up close and said he supports the course of action Nadler has decided to pursue.”Not seeking accountability for what appear to be credible allegations that crimes were committed, meaningful crimes, runs the risk of normalizing that behavior,” Gore said.With impeachment on the table and climate policy virtually off it, advancing climate policy during the Trump administration could be difficult. But the surge in climate activism around the world, Gore said, is good news. He also indicated that wind and solar power were growth industries for the economy.”This is the best way to create millions of new jobs,” he said. “This is where the economic growth of the future is to be found.”Copyright © 2019, ABC Radio. All rights reserved.