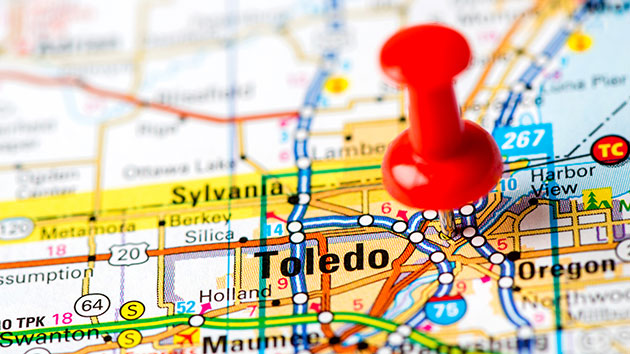 (TOLEDO, Ohio) — An Ohio man has been hit with federal charges after threatening Rep. Alexandria Ocasio-Cortez with an online post that said the outspoken congresswoman from New York “should be shot.”Timothy James Ireland Jr., 41, was arrested at his Toledo residence Thursday and was charged in U.S. District Court for making threats toward Ocasio-Cortez on his personal Facebook account.“She should be shot,” Ireland allegedly wrote on July 23. “Can’t fire me, my employer would load the gun for me.”Ireland has been charged with one count of being a felon in possession of a firearm, one count of being a fugitive in possession of a firearm and one count of making interstate threats.“There is absolutely no place in the marketplace of ideas for threats of violence against any person, especially those who are elected to represent the American people,” said Justin Herdman, U.S. Attorney of the Northern District of Ohio. “Disagreement on political issues cannot lead to acts of violence, and if it does, we will seek federal prison time.”When questioned by Capitol Police about the alleged Facebook post, Ireland said he was proud of it, according to the affidavit.Agents found seven rounds of ammunition in Ireland’s home, officials said.It was not immediately clear if Ireland had legal representation.A spokeswoman for Ocasio-Cortez declined comment.Last month, Ocasio-Cortez was also threatened with being shot after a Louisiana police officer called her a “vile idiot” who “needs a round.” The officer, Charles Rispoli, was fired four days later.Copyright © 2019, ABC Radio. All rights reserved.

Jada Pinkett Smith celebrates 50th birthday on ‘Red Table Talk’; ABC to adapt Baratunde Thurston’s ‘How to Be Black’
Nicole Richie sets hair on fire while blowing out birthday candles
Tonight on ABC: ‘The Wonder Years’
Is It Time To Go All-In On The Raiders?
Melissa Joan Hart reflects on ‘﻿Sabrina the Teenage Witch’﻿ ahead of show’s 25th anniversary
Brian Laundrie search presses on as death of Gabby Petito ruled homicide: Live updates