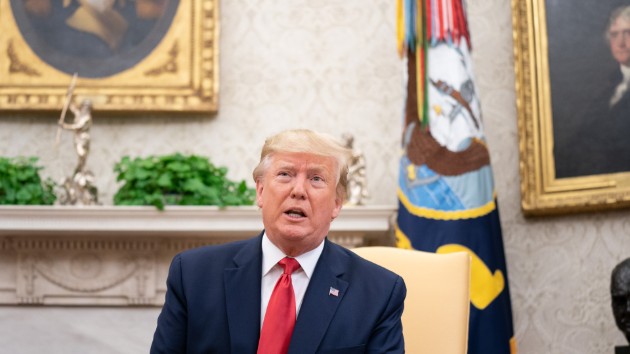 (WASHINGTON) — President Donald Trump said Friday that he thinks “very meaningful background checks” can pass Congress but said the Republican-controlled Senate doesn’t need to come back early from its August recess and can deal with the issue in September. “We have to have very meaningful background checks,” he told reporters as he left the White House for a trip to New York. “I want to see it happen,” he said. “We need intelligent background checks.” He said Senate Majority Leader Mitch McConnell was “totally on board.” Republican senators, the president said, “are looking for me to give a signal.” “I think now we have a chance to do something much more meaningful,” Trump said, than measures taken after the Parkland, Florida, high school shooting in 2017.”I think in the end the NRA will either be there or maybe be a little bit more neutral and that would be OK,” he said, following a report that NRA chief executive Wayne LaPierre has warned him Trump’s supporters don’t support new background check measures. “We don’t want people that are mentally ill, people that sick — we don’t want them to have guns,” the president said.Earlier Friday, Trump tweeted that there are “serious discussions” between House and Senate leadership on “meaningful background checks,” though Congress is unlikely to respond to last weekend’s deadly mass shootings until at least September. At the same time, Trump, who spoke with the NRA’s LaPierre multiple times this week, said the “strong views” of the NRA and others should be “represented and respected” in any bipartisan agreement but stressed that “guns should not be placed in the hands of mentally ill or deranged people.” “I am the biggest Second Amendment person there is, but we all must work together for the good and safety of our Country,” Trump tweeted. “Common sense things can be done that are good for everyone!”In the aftermath of the shootings, which killed a combined 31 people, Trump has signaled a willingness to support congressional efforts to craft a bipartisan agreement to address background checks and enact red-flag checks to prevent mentally ill people from obtaining firearms. The Washington Post, however, reported that the NRA warned the president that changes to background check laws could cost him politically with the Republican base.The president also spoke via telephone with House Speaker Nancy Pelosi, Senate Minority Leader Chuck Schumer, as well as McConnell on Thursday.”The President gave us his assurances that he would review the bipartisan House-passed legislation and understood our interest in moving as quickly as possible to help save lives,” Pelosi, D-Calif., and Schumer, N.Y., wrote in a joint statement.The president and first lady Melania Trump visited Dayton, Ohio, and El Paso, Texas, on Wednesday, meeting with first responders, health care professionals and victims and their families from the shootings.

Haitian migrants cleared from camp at Texas border but controversy continues
Generational wealth implications: Black and Latino-owned homes are more likely to be undervalued
Nick Cannon teases possibility of having more children: “My therapist says I should be celibate”
Let’s-a go! Chris Pratt to voice Mario in upcoming ‘Super Mario Bros’ movie
‘The View’ hosts leave mid-show due to testing positive for COVID-19, miss Vice President Harris interview
Gabourey Sidibe shares the special connection she has to her new podcast thriller ‘If I Go Missing the Witches Did It’