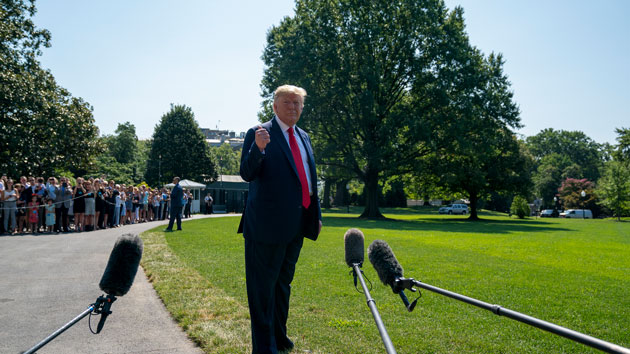 (WASHINGTON) — President Donald Trump said on Friday that he received another letter from North Korea’s Kim Jong Un on Thursday amid stalled talks over the regime’s nuclear weapons program and Kim’s recent missile launches.Trump said the missive was three pages, hand-delivered, “very positive,” and “really beautiful,” speaking to reporters as he left the White House.The note is not the only message Kim has sent the U.S. Over the course of two weeks, North Korea has launched four rounds of short-range ballistic missile, although Trump again dismissed those tests Friday.”There have been no nuclear tests. The missile tests have all been short-range, no ballistic missile tests, no long-range missiles,” Trump said, although the Pentagon has determined that all four rounds were of short-range ballistic missiles.Those launches have been both a way for the regime to enhance its missile capability and to send a message to the U.S. and South Korea to halt its joint military exercises that it considers “war games” and a pretext to an invasion of the North.”He wasn’t happy with the war games… I’ve never liked it either,” Trump said. “You know why? I don’t like paying for it.”In March, the U.S. and South Korea halted their large-scale spring military exercise in order to give Trump’s diplomatic efforts space. That annual exercise was routinely protested by Pyongyang as provocative.Instead, the U.S. has been holding new exercises at lower command levels to allow both U.S. and South Korean forces to maintain their readiness, including the ongoing exercises now which are largely computer simulated.Trump expressed support for those because they also involve South Korea taking command of joint military forces on the peninsula to combat North Korea: “I like that because that’s what should happen.”Despite Trump and Kim’s overall displeasure with exercises, Defense Secretary Mark Esper said Tuesday there are no plans to scale back future military exercises “at this point.”The letter comes as the U.S. continues to wait for North Korea to launch working-level talks on the “complete denuclearization of the Korean Peninsula” that the two leaders agreed to at their first summit in Singapore.Esper visited South Korea Friday for a series of meetings, telling South Korean President Moon Jae In that the U.S. hopes to schedule talks “as early as possible,” according to Moon’s office.Those talks were set to start “probably around the middle of” July, Secretary of State Mike Pompeo said on June 30 after Trump and Kim met briefly at the Demilitarized Zone between the North and South.After nearly six weeks, however, the two sides haven’t met. Pompeo said Wednesday his special envoy Stephen Biegun and his team are “planning for negotiations in a couple of weeks.” When asked by a reporter whether the missile launches are “dampening the environment” for talks, Pompeo responded flatly: “No.”

Analysts say there will be no progress without working-level negotiations on how to dismantle the regime’s nuclear weapons program and lift United Nations sanctions, even if there is another summit between Trump and Kim.Pompeo said last month there were no plans for one, although Trump said Friday they could meet again.Trump also touted the success of his engagement with Kim in bringing home the remains of U.S. service members killed in the Korean War. North Korea handed over 55 sets of remains in July 2018, but since then, the Pentagon office tasked with handling the issue has halted operations because North Korea has stopped engaging them.Copyright © 2019, ABC Radio. All rights reserved.