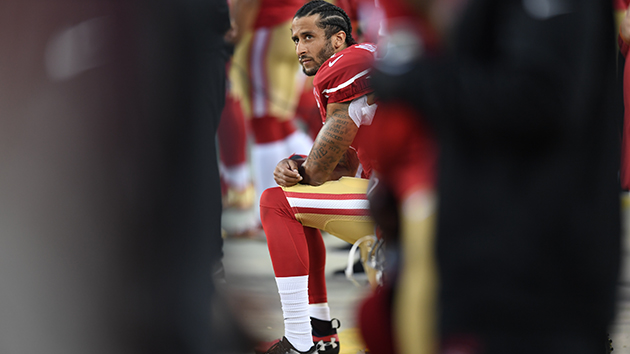 (WASHINGTON) — President Donald Trump said Friday that Colin Kaepernick should be signed by an NFL team “if he’s good enough.”The president was asked about Kaepernick while speaking with the media outside the White House. That happened just one day after Kaepernick posted a video to Twitter showing himself working out in a gym. He says he has been working out five days a week for three years since he last played in the NFL.”If he was good enough, they’d hire him,” Trump said Friday. “Why wouldn’t he play if he was good enough?”Trump cited his relationship with New England Patriots owner Bob Kraft, saying “if he’s good enough” someone would sign him. “Frankly I’d love to see Kaepernick come in,” Trump added. “But I don’t want to see him come in because someone thinks it’s a good PR move.”Kaepernick drew attention in 2016 when he began kneeling during the nationl anthem to protest racial injustice and police brutality. In 2017, Trump said such protests were “hurting the game” and suggested owners should release players who protest.Kaepernick opted out of his contract in March 2017 and hasn’t been signed since. He later filed a grievance against the NFL, alleging that teams are colluding against signing him to a contract.Copyright © 2019, ABC Radio. All rights reserved.

Jada Pinkett Smith celebrates 50th birthday on ‘Red Table Talk’; ABC to adapt Baratunde Thurston’s ‘How to Be Black’
House committee probing Jan. 6 attack could subpoena Trump aides: Sources
Body found near Grand Teton confirmed to be Gabby Petito, death ruled a homicide
‘Dear White People’: Justin Simien explains the purpose of ’90s music & why the series will never be “over”
Those suffering from sickle cell disease may finally be getting some relief as experts work on cure
Ben Affleck says he’s “in awe” of girlfriend Jennifer Lopez