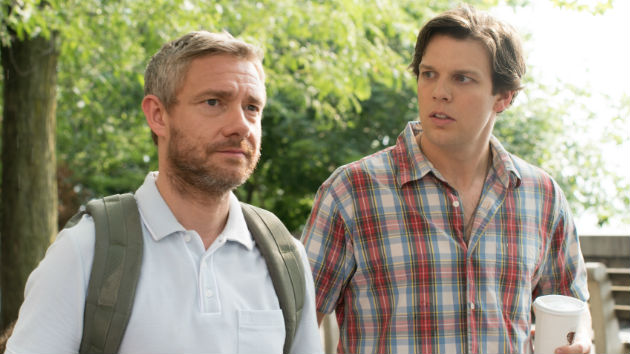 (NEW YORK) — Actor Jake Lacy’s name might not ring a bell, but you probably know him as Pete Miller on the ninth and final season of The Office.

He’s been busy of late, appearing opposite Oscar-winner Sam Rockwell in the series Fosse/Verdon, and wrapping a series adaptation of Nick Hornby’s beloved book High Fidelity.

Lacy also stars opposite Martin Freeman in the new film Ode To Joy, which debuts in theaters and video on-demand services today.

Lacy plays Cooper, the caring but slightly shallow brother of Freeman’s Charlie, who suffers from cataplexy — a condition that causes him to pass out whenever he feels intense happiness.

Needless to say, when Charlie meets the woman of his dreams, Morena Baccarin’s Francesca, things don’t go the way he hopes.

While his character’s condition could be played for laughs, director Jason Winer and Freeman worked hard to present it with dignity, Lacy explains.

“There is like a frustration in being caught inside this circumstance…he can’t control,” says Lacy. “Like, ‘Do I pursue joy in my life or do I intentionally live a middle-of-the-road mundane existence to protect myself?"”The offbeat romantic comedy also stars The Big Bang Theory’s Melissa Rouch, and SNL veteran Jane Curtain.Lacy also shared his screen test experience for The Office — which he was shocked to find out was right on the Dunder Mifflin set.

“It’s like if they added a bartender on Cheers and…then they were like, ‘Great. So come on behind the bar and then you and Sam will make some drinks…’ And you’re like, ‘What is happening!?"” he recalls of the intimidating experience.

“As a super fan, it was, like, trying to be professional and do my job [but]…It was just was so surreal. So strange.”

As for the news The Office was leaving Netflix next year, Lacy said, “I’m a fan of The Office…I mean like there’s Jake who was on this show and had a job. And then there’s also Jake who absolutely loves The Office. And so I identify on both sides: I heard that news and I was like, “Don’t do that! What are you doing?! Don’t take away that show! What’s wrong with you!"”

He added, “You know it’s…a very weird thing to have loved a show for a long time and then have like the one in a million good fortune of getting to be a part of it.”