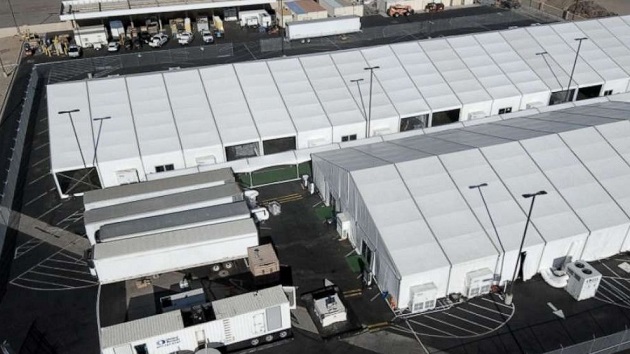 (YUMA, Ariz.) — For the first time, the Department of Homeland Security allowed ABC News cameras inside an immigrant holding center in Yuma, Arizona, that was completed in June to the tune of $15 million after a massive spike in families crossing the border.Yuma saw a major surge in crossings earlier this year only behind the Rio Grande Valley and El Paso, Texas. “One of our biggest concerns as we’ve talked about is the families, vulnerable families and children, coming over, young children crossing this year. We had a huge peak in April, May and early June of crossings, 144,000 crossed in May. … That resulted in overcrowding of border patrol facilities. These are police stations. They’re only made for very temporary processing, primarily for single adults, often with a criminal background. So, to have families and kids in that environment was very difficult for us,” Acting DHS Secretary Kevin McAleenan told ABC News Thursday in an interview after a tour of the facility.He said that these new facilities had significantly reduced the pressure on other holding facilities.Inside the center, a mother clutched her baby as she spoke to an agent. A father rocked his infant back and forth, his knee bouncing up and down out of clear nervousness. There was a large medical unit equipped with physicians’ assistants and Coast Guard medics.There were clean showers. There were stacks of shelves with clean clothes, diapers, shampoo/conditioner, soap, toothpaste, and lots of food and snacks.Several migrant families wrapped in silver Mylar blankets were going through a processing center where they were fingerprinted, background checked and connected with interpreters. Others were lying on mats and covered in blankets.The images were a contrast to a damning July DHS inspector general report that showed jam-packed conditions inside five centers in Texas. The report called one site “a ticking time bomb” and documented sordid conditions inside detention centers that included migrants packed into holding cells, forced to stand for days in unsanitary conditions.With money from Congress, however, DHS built soft-sided detention centers in Yuma, El Paso and the Rio Grande Valley, the three places experiencing the highest number of crossings.McAleenan said that DHS had also opened single-adult temporary facilities for the first time on the U.S.-Mexico border as well.”We’ve added 5,000 spaces in these temporary facilities since we got the supplemental funding on June 27 from Congress,” McAleenan said Thursday.He told ABC News that the five facilities visited by the inspector general were now under capacity and “they look much better.””We built these temporary facilities to provide a much better area where we can provide care and better conditions while families and children are in that brief period where they’re processed at the border before they’re transferred to either ICE or Health and Human Services,” he said.McAleenan said that overall, crossings had dropped significantly in Yuma and El Paso but not by a huge amount in the Rio Grande Valley. He attributed the drop in crossings in Yuma to an increase in spending by Congress and to Mexican authorities cracking down on a truck route straight from Guatemala that can transport migrants into the U.S. in five to seven days.When asked whether he could guarantee that all migrants in detention centers were in humane conditions, he said: “That is a daily focus of everybody in our entire chain of command from the secretary level down. … We have very strong policies. We’ve got the funding for the supplies, the food, the medical care we need to do the absolute best we can to provide a good situation. And, so, I can guarantee you that it’s our top focus and priority.”That said, McAleenan said this is still beyond a crisis. He said that while the number of people detained had dropped from 20,000 to 5,000 since May, 5,000 in any other year would be an exponential amount of people.”We’re happy to get the emergency supplemental funding. We advocated for that for months but we also need changes in our laws that have not been forthcoming in this political environment,” he said.