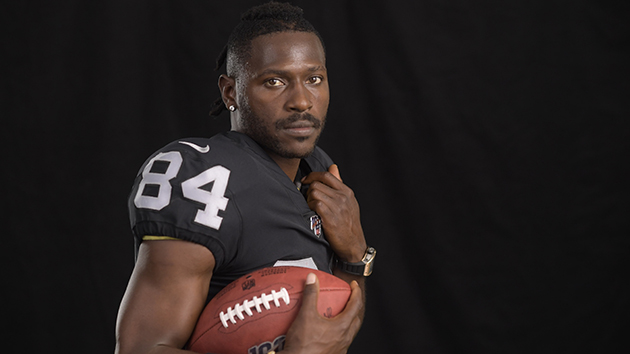 (OAKLAND) — New Oakland Raiders wide receiver Antonio Brown has filed a grievance against the NFL over league rules regarding helmets.League sources told ESPN that Brown wants to be allowed to wear his preferred helmet, which is not permissible under the NFL’s rules. ESPN’s Adam Schefter says Brown believes the new styles of helmet inhibit his vision while trying to catch passes, and that he will not play football unless he is allowed to do so in his old helmet.ESPN reports that Brown’s absence from training camp is tied more closely to the helmet issue than a foot injury that he has been recovering from. Earlier this week, reports indicated that Brown had suffered frostbite on his feet from a cryotherapy accident.Brown spoke with league officials Friday on a two-hour conference call to argue his point. A decision come could next week.The helmet Brown prefers was discontinued by its maker, Schutt, and is no longer certified by the National Operating Committee for Standards and Athletic Equipment. The league said last season that 32 players were wearing helmets that are no longer allowed, including Brown and New England Patriots quarterback Tom Brady. Copyright © 2019, ABC Radio. All rights reserved.

“The world has changed. He hasn’t” – ‘Curb Your Enthusiasm’ teaser reveals premiere date for Season 11
Dad builds space for immunocompromised kids to safely play
Capital Gazette shooter sentenced to life in prison without the possibility of parole
COVID-19 live updates: More outbreaks in schools without mask policies, CDC finds
The Case For Believing In Michigan Football
Billy Porter reveals why he wants to say “thank you” to Elizabeth Taylor