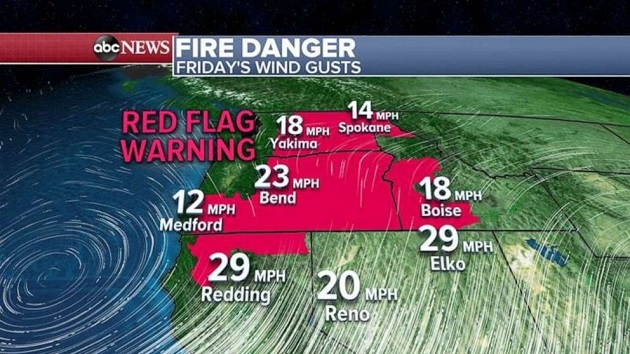 (NEW YORK) — There are 85 large wildfires burning in the U.S. on Friday morning, most of them in the western states from New Mexico to Washington. Several new fires have ignited in California, including one in Lake County that prompted mandatory evacuations for residents living in the area. Also, in Lassen County, California, three wildfires started in the last two days, according to Cal Fire. The biggest fire is approaching 1,000 acres and threatening structures. In Washington, major road closures have been issued due to the 40,000-acre Williams Flats Fire, which is only 25% contained.There’s bad news for fire areas as a storm system is moving in that will produce dry lightning storms with erratic, gusty winds. Four states in the Northwest have red flag warnings.Dangerous heatDangerous heat and humidity in the South will spread from Texas to Florida where heat advisories have been issued for seven states.Some areas in Texas could reach a heat index — “feels-like temperatures” — over 110 degrees.Storm potentialThere are two areas where severe weather could strike Friday: one in Oregon, as the western storm system moves in, and the second in the Plains.People in Oregon could see damaging wins and large hail.Meanwhile, North Dakota to Nebraska could see a few tornadoes, and also damaging winds and hail.