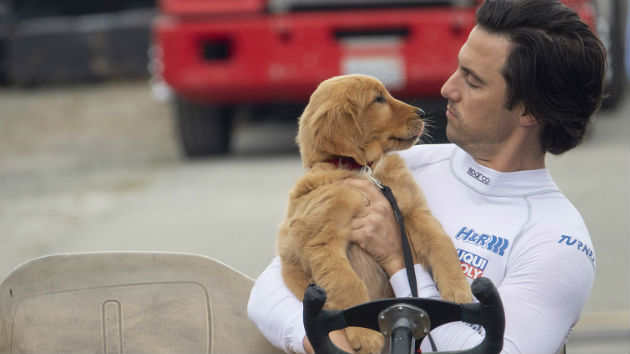 (NEW YORK) — Based on the best-selling novel by Garth Stein, the film The Art of Racing in the Rain stars This Is Us patriarch Milo Ventimiglia, Amanda Seyfried and an adorable golden retriever named Enzo.

The film has Ventimiglia playing Denny, an aspiring Formula One driver, whose wise, four-legged best friend has his thoughts voiced by Oscar-winner Kevin Costner.

Speaking about hearing Costner’s voice describing Enzo’s thoughts, Milo says, “I didn’t even hear the narration when I was filming it…[But] when I heard it with Kevin’s voice, and it was all put together, I mean…it explodes.”

W.C. Fields said “never work with children or animals,” but Milo had to do both in the film. He says acting opposite Enzo was a bit frustrating, because it’s not like the dog can act back.

“It’s technical,” the actor tells ABC Radio, laughing, “I mean, I don’t get a treat at the end of every take. Nobody’s feeding me like little chicken biscuits! Nobody’s doing that!”

“I’m one of those actors, that…I need scene partners. I need something that I can draw and pull from,” he notes. “Even if a human actor is just reading their lines, but they don’t really believe it, they’re not into the scene…then it makes it that much more difficult for me.”As for his day job, NBC’s This Is Us has earned Ventimiglia three Emmy nominations but to date, no wins. Is it important for him to reverse that trend at the upcoming Emmy Awards?

“No.” he tells us. “To be recognized by your peers…I’m grateful…If I come home with a trophy? Cool. If I don’t? Cool. I’m still showing up to work the next day… and busting my a**.”

The Art of Racing in the Rain opens Friday.