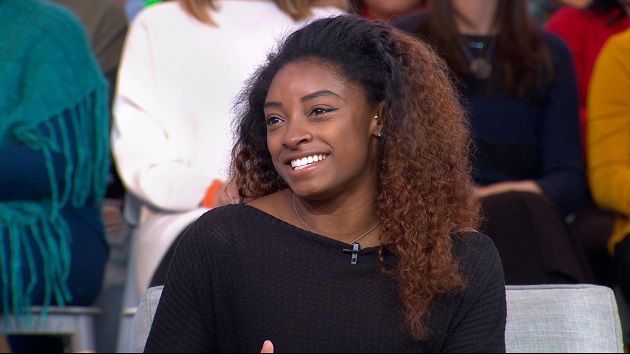 (KANSAS CITY, Mo.) — Olympic gold medalist Simone Biles blasted USA Gymnastics on Wednesday, still reeling from the impact of sexual abuse and the organization that “failed to protect” her and dozens of other female gymnasts.Biles spoke to the press ahead of her sixth U.S. Gymnastics National Championships appearance in Kansas City, Missouri, and expressed her frustration with the sport’s governing body in the wake of the Larry Nassar scandal.”It’s hard coming here for an organization and having had them fail us so many times. And we had won gold. We’ve done everything that they asked us for, even when we didn’t want to. And they couldn’t do one damn job. You had one job. You literally had one job, and you couldn’t protect us,” the four-time Olympic gold medalist said, wiping away tears.”It’s just really sad ’cause now every time I go to the doctor or training I get worked on, it’s like, ‘I don’t want to get worked on,’ but my body hurts. I’m 22 and at the end of the day that’s my fifth rotation and I have to go do therapy. But it’s just hard,” she continued. “We try to work through it, but it will take some time. I’m strong, I’ll get through it, but it’s hard.”Biles, 22, was one of dozens of gymnasts who spoke out about the rampant sexual abuse by the disgraced doctor, who was sentenced in January to up to 175 years in prison.The four-time defending world champion in the all-around is looking to lock up in her spot for the world championship team in October.She has won the last five all-around titles she’s taken part in at the U.S. Championships. She took a year off in 2017, the only time since 2013 she hasn’t won.If Biles notches her sixth title, she will tie Clara Schroth Lomady’s record from the 1940s and 1950s, according to OlympicTalk.

Statue of Bitcoin founder honors mysterious ‘god’ of cryptocurrency
COVID-19 live updates: More than 10,000 new deaths reported in US in one week
Tyra Banks defends Olivia Jade ahead of her ‘Dancing with the Stars’ debut: “Olivia is so brave”
‘Ted Lasso’? ‘WandaVision’? ‘Mare of Easttown’? Who will clean up on Sunday’s Emmy night?
Jennifer Aniston says season 2 of ‘The Morning Show’ ﻿will tackle cancel culture
These vaccine mandates are already in place to attend school in the US