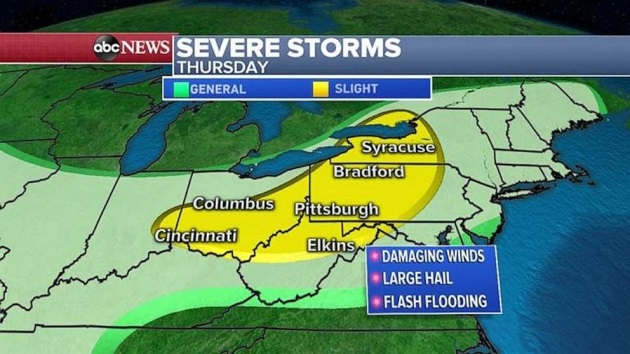 (NEW YORK) — There were more than 200 damaging storm reports on Wednesday, mostly along the East Coast from New England to the Carolinas, including an EF0 tornado in Springfield, New Jersey, and flash flooding as a result of 3 inches of rain in Hartford, Connecticut.On Thursday, the severe storms will be in the eastern Great Lakes, parts of inland Northeast and into Ohio Valley, including Cincinnati, Pittsburgh and Syracuse.The biggest threat Thursday will be damaging winds and large hail. In areas where the storms persist the longest, heavy rain could produce flash flooding.Heat and fire dangerThe Southern heat wave continues from Texas to Alabama, where seven states are under a heat advisory.The heat index is forecast to reach nearly 110 degrees in some areas, making it dangerous just to be outdoors.Several wildfires and brush fires broke out Wednesday from California to Washington as dry, gusty and hot winds swept over the area.Six Western states — from California to Montana — are under heat and fire alerts Thursday as more gusty winds and dry conditions are expected.

McAuliffe, Youngkin spar over vision for commonwealth in first Va. gubernatorial debate
COVID-19 live updates: More than 10,000 new deaths reported in US in one week
More than 600,000 flags on National Mall stand witness to America’s COVID dead
Murdaugh murders and mysteries timeline: Key events in the South Carolina family’s scandals and deaths
Alaska once had the highest vaccination rate. Now it’s in a COVID-19 crisis.
In theaters now: Gerard Butler and Frank Grillo in the “irreverent, explosive” ‘COPSHOP’