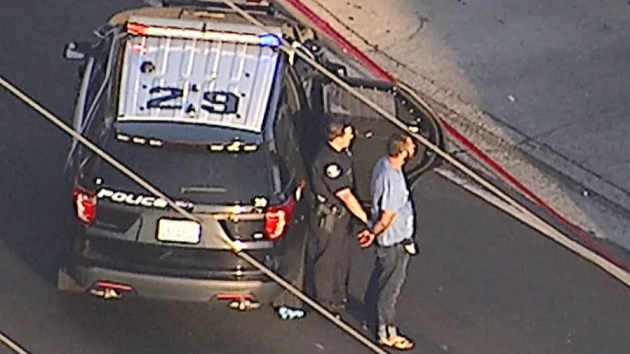 (GARDEN GROVE, Calif.) — Four people are dead and two others wounded after a Southern California man went on a violent stabbing spree Wednesday evening.A 33-year-old man is in custody for the string of attacks, police said.”This is tragic. We don’t want to see tragedies like this happen,” said Garden Grove Police Lt. Carl Whitney. “We’ve seen tragedies like this happen across the United States, but what the good point we can see out of this is that our officers responded quickly, rapidly and were able to take this guy into custody as fast as we could.”The deadly spree began at 4:23 p.m. local time when the suspect robbed a bakery in Garden Grove, California, a few miles south of Anaheim. At 5:04 p.m., police said they found two men stabbed at a nearby apartment complex.One of those victims was pronounced dead at the scene, while another died at the hospital, according to authorities.At 5:40 p.m., the suspect allegedly robbed a check-cashing business, also in Garden Grove.And then, 25 minutes later, a woman was stabbed multiple times at a Garden Grove insurance business. She is expected to survive, police said.Four minutes after robbing the insurance business, the same suspect got into an argument with a man pumping gas at a neighboring Chevron station. The man was stabbed multiple times with knives and a machete and his nose was nearly severed, police said. He is, however, expected to live.By 6:25 p.m., the suspect allegedly robbed a 7-Eleven in Santa Ana and stabbed an armed security guard. He took the guard’s gun. The guard has also died, police said.After investigating the robbery and fatal stabbing at the 7-Eleven, police discovered the suspect had also previously robbed a Subway and stabbed an employee to death.An undercover Garden Grove police officer found the suspect’s car at the 7-Eleven and when the suspect exited the store armed with a handgun and knife he complied with the officer’s order to drop weapons and was taken into custody.”These are all random acts of violence. Our suspect was not associated with any of our victims,” Whitney said.Police called the man “full of anger.”The suspect has a criminal history, and lived at the apartment complex where the first two people were found dead, police said. Copyright © 2019, ABC Radio. All rights reserved.