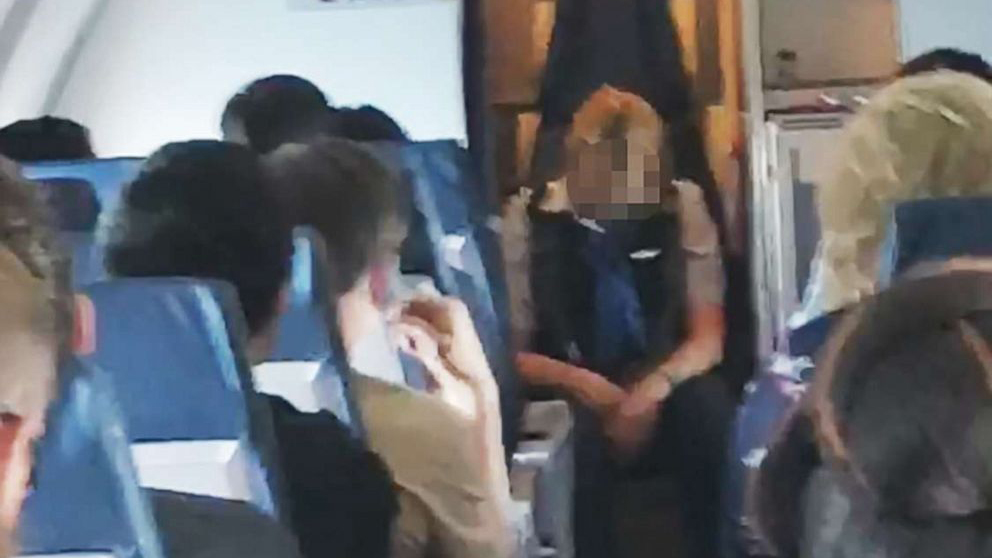 (NEW YORK) — A flight attendant was charged with criminal public intoxication on Thursday after passengers aboard a United Express flight raised alarms and one tweeted a video appearing to show her slumped over in her seat.Julianne March, 49, from Waukesha, Wisconsin, was charged with the misdemeanor by prosecutors in St. Joseph’s County, Indiana. United Airlines earlier Thursday confirmed passengers had reported a flight attendant who appeared to be under the influence during the United Express flight from Chicago, Illinois, to South Bend, Indiana, on Aug. 2.When the plane landed in South Bend, officers boarded, March started crying and, when asked which city she was in, said Chicago, the criminal complaint said.And when administered a Breathalyzer test, her level was 0.204, five times over the legal limit for flight attendants, the complaint said. The Federal Aviation Administration said the limit for all aviation sensitive positions — pilot, flight attendant, mechanic, for example — is .04 for alcohol.The flight was operated by Air Wisconsin — meaning it was an Air Wisconsin crew and flight attendant. An Air Wisconsin spokesperson said, “The Flight Attendant involved in this incident is no longer an employee of the company. We will continue to cooperate with local authorities and assist them as necessary.”March was a probationary flight attendant who had been on the job only a few months, and was fired on the terms that she didn’t complete the probationary time period, a source said.”We expect our regional carriers to take appropriate action as required when issues like these happen with their employees. Legally and with regards to regulatory agencies this is an Air Wisconsin issue,” a United Airlines spokesperson told ABC News.The Federal Aviation Administration said the limit for all aviation sensitive positions — pilot, flight attendant, mechanic, for example — is .04% for alcohol.In an interview with ABC News on Thursday, passenger Aaron Scherb said when he boarded United Express flight 4849 from Chicago to South Bend, he noticed the sole flight attendant on the plane was acting odd.She was “kind of leaning against the galley and didn’t seem to be making eye with passengers while boarding, which seemed a little strange,” Scherb said, reperating an account first reported in the South Bend Tribune. After everyone boarded the flight and the plane was still at the gate, the flight attendant started to make the security announcement but her speech “very slurred,” according to Scherb.He said he then noticed her bumping into several seats and passengers as she walked up and down the aisle to check the overhead bins.After the plane taxied to the runway, the flight attendant sat down in the jump seat and “appeared to pass out for nearly the whole flight,” Scherb recalls. Scherb said numerous other passengers took videos and photos of the flight attendant.While they were in the air, Scherb said a female passenger noticed the flight attendant didn’t have her seat belt on and helped strap her in.”The flight attendant didn’t get up for the whole flight,” Scherb said. “She didn’t do a security announcement or secure the cabin. When we landed, she appeared to need help opening the jet bridge.”Scherb then told one of the pilots that the flight attendant shouldn’t be on a return flight, and he replied something to the effect that “we’re handling it,” Scherb told ABC News.”Two uniformed officers were waiting at the end of the jet bridge to interview and escort the flight attendant off the flight,” Scherb said.Scherb said he tweeted United Airlines about the experience, and a United representative contacted him later that day to offer him a $500 voucher or 25,000 miles in addition to a refund for that segment of his trip, according to Scherb.Scherb said he has not accepted either offer from United.”Given that the safety and well-being of all 50 passengers on that flight was jeopardized, I find United’s response to be insufficient,” Scherb said. “Especially since United had just given a $1200 voucher to a would-be passenger on the flight as we were about to board because the flight was oversold.”At the same time, Sherb said, “I hope this flight attendant is not fired. I would hope that United Airlines and Air Wisconsin treat this person as an employee, not as an expendable commodity, and that they will help her get treatment for addiction, if that’s in fact what she suffers from. Given the significant safety and security roles that flight attendants have, United and other airlines should consider adopting zero tolerance policies for flight attendants going forward,” he said.March could not be reached for comment and it was not clear whether she had a lawyer.The FAA said it would investigate the matter as a possible civil violation of the regulations that apply to safety-sensitive employees, prohibiting them from performing duties while under the influence of alcohol or drugs.The Association of Flight Attendants said in a statement: ” Substance abuse issues happen in every workplace, aviation being safety sensitive we take it incredibly seriously. There are programs that help pilots and flight attendants with addiction issues. We believe recovery is possible. The union started the Flight Attendant Drug and Alcohol Program deal with these issues.”