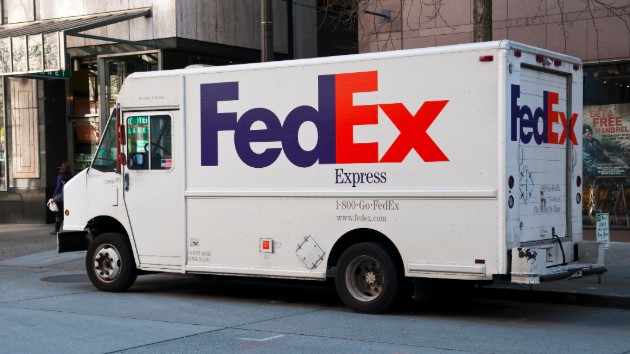 (NEW YORK) — FedEx is pulling the plug on Amazon deliveries, effectively ending domestic ties with the largest U.S. retailer, the company said on Wednesday. Shipping company officials said the company would not renew its ground delivery contract with Amazon when it expires at the end of August and would focus on business from other retailers. The move comes as Amazon steps up efforts to build up its own delivery fleet, and, in doing so, is increasingly becoming a competitor to its former shipper. “This change is consistent with our strategy to focus on the broader e-commerce market, which the recent announcements related to our FedEx Ground network have us positioned extraordinarily well to do,” FedEx officials said in a statement.The news was first reported by Bloomberg, which reported that FedEx would continue to deliver Amazon packages internationally. Amazon only made up about 1.3% of FedEx’s sales in 2018, according to Bloomberg.FedEx signalled the sea change in June, when it announced it would not renew its deal to fly Amazon’s deliveries through its Express unit in the United States.”We are constantly innovating to improve the carrier experience and sometimes that means reevaluating our carrier relationships,” an Amazon spokesperson wrote in a statement. “FedEx has been a great partner over the years and we appreciate all their work delivering packages to our customers.”Amazon has been focused on building out its own infrastructure by contracting its own planes, trucks and other traditional means of transportation.The fissure comes as both companies aggressively explore new technologies and delivery methods amid ever increasing e-commerce sales.In January, Amazon debuted a delivery robot named Scout for the last stretch of deliveries or the so-called retail “last mile.” On Tuesday, the company announced it was extending the Scout trial program to Irvine, California.In June, the online retailer announced it plans to start drone delivery “within months.”In February, FedEx unveiled the “FedEx SameDay Bot,” to deliver same-day orders within a three-mile distance from a store. The program was slated to roll out this summer in Memphis, Tennessee, where the company is based. The company has paired with Autozone, Pizza Hut, Target and Walmart for the rollout. Copyright © 2019, ABC Radio. All rights reserved.