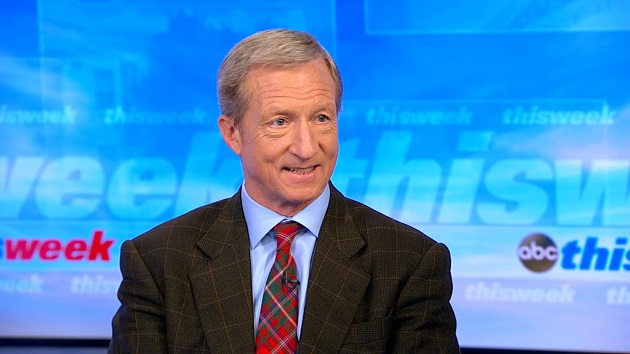 (WASHINGTON) — Since lacing up his running shoes for the 2020 race less than a month ago, billionaire, liberal activist Tom Steyer has outpaced every single other candidate in his campaign ad blitz — scrambling to make up for lost time as he competes with rivals who are months ahead of him. The California hedge fund mogul believes his populist message, and perhaps more importantly $100 million of his own money, could pave his way to Pennsylvania Avenue, as most of the candidates in the crowded Democratic primary pivot towards grassroots support.Steyer has been blanketing airways and social media platforms in key states with advertisements targeting President Donald Trump and introducing himself to the American people. He’s spent more than $6.6 million on television and online ads in the first four weeks of his campaign, according to television and online ad data.He has to — the deadline to qualify for the third democratic debate in September is swiftly approaching and there’s a high threshold for unique donors to qualify and candidates have to hit 2% in at least four recognized polls.That means grabbing the attention and imagination of a huge swath of voters in a short period, if he wants his own podium on the stage. And Steyer has not been coy about his needs — in most of his online ads, Steyer is expressly asking donors to contribute $1 so that he can meet the donor count requirement and make it to the upcoming debate.With his massive, self-funded war chest, Steyer has been topping every other 2020 White House hopefuls’ weekly social media ad spending — even President Donald Trump — since launching his campaign last month. And in those four weeks, he’s nearly spent as much as Sens. Elizabeth Warren, D-Mass., and Bernie Sanders, I-Vt., have spent in online ads in the past half year.With a focus on the digital space this year, few of the top 2020 candidates have spent on television ads, so far. But Steyer has already spent millions to get his message out on the airwaves, dwarfing two of his Democratic contenders who have been spending the most aggressively since earlier this year: former Rep. John Delaney, D-Md., and Rep. Tulsi Gabbard, D-Hawaii. Sen. Kirsten Gillibrand, D-N.Y., is the only other candidate to run ads, but they were limited to a handful of commercials on cable last month.In just one week — around the second Democratic debate and leading up to the Iowa State Fair — Steyer spent more than $1 million on television ads and another $1 million on Facebook ads. He’s especially pooled those hefty sums in the early primary states of Iowa, New Hampshire, Nevada and South Carolina — along with national cable time on MSNBC and CNN. His latest ad titled, “Trump is a Fraud” was specifically timed to air in between CNN’s Democratic debate in Detroit, campaign spokesman Alberto Lammers told ABC News.And in the wake of the mass shootings in El Paso, Texas, and Dayton, Ohio, Steyer — in one of his latest television ads — has called for Congress to cancel its August recess and hold oversight hearings. In the ad, he accuses the president of dividing the country with his immigration policies and racially charged comments.”The ad calling on Speaker (Nancy) Pelosi to cancel the congressional recess is performing really well — people are really responding to that — and that really reflects on Congress,” Lammers told ABC News.While Trump and the Republican Party’s massive fundraising advantage looms over the 2020 Democratic field, Steyer has positioned himself as the man to beat the president.Before tossing his hat in the ring, he poured hundreds of millions of his own money into electing Democrats garnering support for Trump’s impeachment. In 2018, through his two political organizations, Need to Impeach and NextGen America, he spent $74 million in the midterm elections with the goal of electing progressive candidates across the country.The liberal megadonor has stepped down from his outside political ventures since declaring his candidacy last month, but has pledged to still commit to the $50 million he promised for Need to Impeach this year. And the super PAC has continued to be active on social media, diligently promoting Steyer’s message calling for the impeachment of Trump in a host of Facebook ads — as recently as last week — featuring special counsel Robert Mueller’s congressional testimony from last month. Copyright © 2019, ABC Radio. All rights reserved.