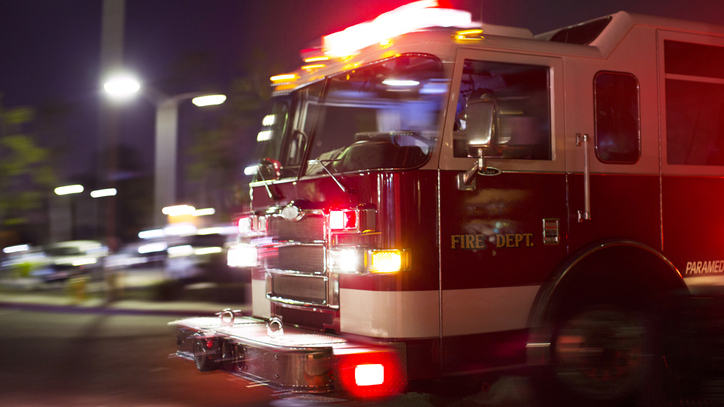 (STERLING, Ohio) — Authorities in Ohio said they are investigating the explosion of a home belonging to an interracial couple as an arson and possible hate crime after racial slurs were found painted on the garage and two nearby vehicles.Around 12:40 a.m. Wednesday, police were called to the two-story house in Sterling, Wayne County, after reports of a fire and blast, Wayne County Sheriff Travis Hutchinson said.When firefighters and police arrived, they found the house engulfed in flames with the side of the home blown out. The house appeared to be abandoned, Hutchinson said.He said that authorities also found racial slurs and a swastika spray-painted on the home’s garage and two vehicles parked next to the home.Hutchinson said the home had been undergoing renovations after a July 3 fire and the homeowners were not living there at the time. Authorities initially said that fire had been accidental. The home had no electricity and the gas had been disconnected by the gas company after construction workers called to report a possible gas leak, he said.A deputy had responded to the call about the possible gas leak and had not reported seeing racial slurs on the garage or vehicles at that time, Hutchinson said. The vehicles did not belong to the couple.In a news release, the Division of State Fire Marshal’s Fire and Explosion Investigation Bureau said that the Federal Bureau of Investigation (FBI) had joined the investigation and that an earlier attempt had been made this week to set the home on fire.”The Sterling Fire District was first called to the residence on Monday after an unknown suspect(s) unsuccessfully attempted to ignite the home by filling it with natural gas and turning the stove burner on,” the news release said. “A reward of up to $5,000 is being offered by the Blue Ribbon Arson Committee for information leading to the arrest and conviction of the person or persons responsible for the fire. Anyone with information is encouraged to call the State Fire Marshal’s tip line at 800-589-2728.”Angela Frase, the house’s owner, told ABC News affiliate WEWS-TV in Cleveland that she had seen the N-word spray-painted on the garage and vehicles when she arrived at the house.She is black and her husband, Brad, is white. She said they’d been married 13 years and had lived in the area for 23 years.”I look at my husband and I say, ‘What do we do? Where do we go from here?’ … I don’t even know where to start,” Frase told WEWS-TV. ” Like, it just makes me want to cry again. I don’t have a clue. Guess, take one day at a time and hope for the best.”She said the couple had not experienced any problems in Sterling.”The last thing that I expected was this,” she said. “Everybody in Sterling knows everybody. … Great neighbors. Never had an issue.”Frase, who said nothing could be saved in the house, said she feared that if the couple tried to rebuild, the perpetrator would return and do the same thing.”I don’t know where to begin,” she told WEWS-TV. “You know, I don’t even know where to start to pick the pieces up. … He (her husband) doesn’t know what to think. He’s very upset about the racial remarks. … I think that has bothered him more than anything. It’s sickening to do this to somebody’s home. … We could’ve been in there.”Hutchinson said the fire department was currently investigating the cause of the fire and ensuring that no one was in the home at the time of the explosion.”We’re not going to tolerate that type of activity and behavior here. We’re going to make sure that we use all the resources to us … to fully investigate this,” he said.