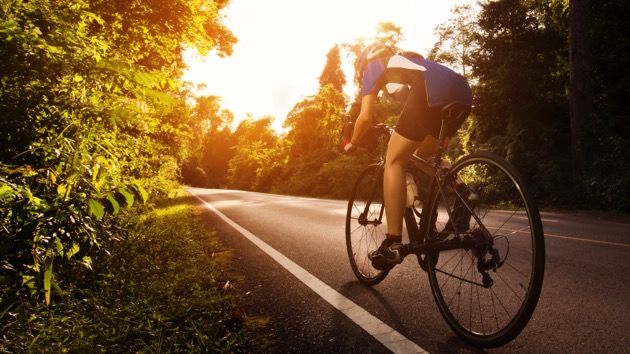 (NEW YORK) — Fiona Kolbinger, a 24-year-old cancer researcher from Germany, became the first woman to win the Transcontinental Race across Europe on Tuesday.In total, she cycled over 2,485 miles (4,000 kilometers) from Burgas, Bulgaria, to Brest, in the northwest coastal region of Brittany, France. It took her 10 days, 2 hours and 48 minutes.”I am so, so, surprised to win. Even now,” she said at the finish line, according to a statement released by the race organization. “When I was coming into the race I thought that maybe I could go for the women’s podium, but I never thought I could win the whole race.”Her historic victory was won out over 265 competitors, including 40 women and 225 men. The second-place winner was Ben Davies of Bristol, England, who finished the race in 10 days, 13 hours and 10 minutes — over 10 hours after Kolbinger.According to Kolbinger’s Strava account — an app that monitors a person’s cycling and running routes — she raced about 330 miles (531 kilometers) in nearly 24 hours on her 10th day in the Transcontinental Race.She described her last night in competition as “too long, too dark and too grim,” according to the race’s Instagram account.The Transcontinental Race, founded in 2013, is a self-supported race, meaning that competitors do not have support vehicles or teams to help with supplies, including food and accommodations.Aside from a start time, there are no organized breaks, so riders can stop to sleep or rest wherever and whenever they want. Riders also pick out their own courses, from the start to the finish line, including four mandatory “control points” along the way.Impressively, this was Kolbinger’s first ultra-distance race, according to the organization, and her reaction at the finish line hints she may come back for more to improve on her already spectacular performance.”I think I could have gone harder,” she told the race. “I could have slept less.”ABC News could not immediately reach Kolbinger for comment, as the race organization said she was resting.Copyright © 2019, ABC Radio. All rights reserved.

Cynthia Erivo salutes Michaela Coel on her historic Emmy win: “Proud is an understatement”
Army Gen. Mark Milley was ‘not going rogue’ in secret calls to China, authors of new book claim
Biden administration to ease restrictions on travelers to US in November
23-year-old woman uses TikTok to highlight influential Latinas
Traveling over the holidays? Here’s how to stay safe from COVID-19
Biden had slow adjustment to ‘cold’ White House, new book claims