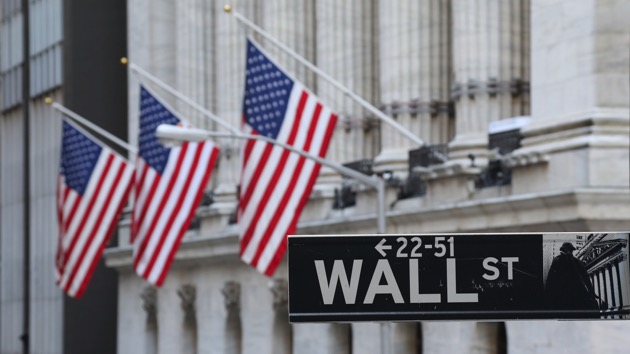 (NEW YORK) — U.S. stocks traded lower Wednesday as traders continued to worry about the continuing effects of the trade battle with China.Shares on the Dow Jones Industrial Average (DJIA) traded 300 to 500 points lower in early trade, with the index hovering around 25,689. The tech-heavy NASDAQ traded 0.64 percent lower at 7,783, and the benchmark S&P 500 Index traded about 1.5 percent lower at 2,839.”Overnight you had three other central banks in the Asia Pacific region lower rates unexpectedly and that spooked traders,” Mike Matousek, head trader at U.S. Global Investors, told ABC News, referring to larger-than-expected rate cuts by India, Thailand and New Zealand. “What you have is traders wondering, ‘What is under the water that we don’t see?’ Because the water is murky.””The worry is that the U.S.-China tariff war is spreading into other markets,” Matousek added.He cautioned, however, against panic. “People need to remember the market still is up 13 percent year-to-date,” he noted. “There’s unrealized wealth that’s disappearing at the rate of 1.5 percent and that has people worried but it’s off record highs.”President Donald Trump has threatened another 10 percent hike in tariffs on $300 billion in goods from China, affecting virtually everything else that is not already subject to import taxes. The move has been opposed by retailers and manufacturers, which are worried about the holiday shopping season as the increased costs may be passed on to shoppers.Copyright © 2019, ABC Radio. All rights reserved.