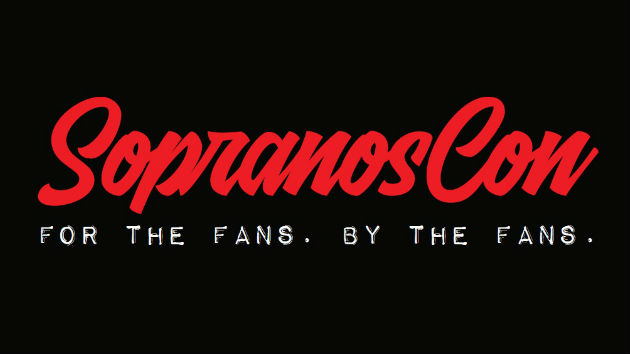 (NEW JERSEY) — A fan expo dedicated to one of the most beloved organized crime dramas of all time has just been announced, and you won’t even have to dig around in New Jersey’s Meadowlands to find it.

“It’s like The Sopranos meets New York Comic Con,” says co-organizer Daniel Trader of SopranosCon, the inaugural gathering.  It’ll take place at the Garden State’s Meadowlands Exposition Center on November 23rd and 24th of this year. Billing itself as “for the fans, by the fans,” SopranosCon will feature a reunion of key cast members, including Vincent Pastore, Tony Sirico, Federico Castelluccio, Vincent Curatola and David Proval, as well as over 30 supporting cast members, with more to be announced, organizers promise.  The convention will feature the usual convention Q&As and autograph signings, but will also, according to organizers, “celebrate the 20th anniversary of the series by showcasing Italian culture…with food, drink, music, comedy, and show-related businesses.”  One event co-sponsor is Holsten’s Ice Cream, which was featured on the Emmy-grabbing HBO hit.

The event will also showcase fan art, and sets and exhibits celebrating locations and other touchstones of the show. Tickets are available at SopranosCon.com.

Incidentally, The Many Saints of Newark, the upcoming feature film prequel to the show, is currently in production in and around New York and New Jersey. It stars Michael Gandolfini, the son of the late James Gandolfini, as a young version of his father’s character, Tony Soprano.

The 1960s-set film, which also stars Jon Bernthal, Ray Liotta, and Vera Farmiga, is slated for release in September of 2020.

More than 600,000 flags on National Mall stand witness to America’s COVID dead
Priyanka Chopra responds to growing criticism over ‘The Activist’: “The show got it wrong”
These vaccine mandates are already in place to attend school in the US
What to expect as FDA advisory panel debates Pfizer COVID booster shots
Happy Halloween! Snoop Dogg and Martha Stewart reunite to bring tasty treats with new food competition
Ken Jennings, Mayim Bialik to host ‘Jeopardy!’ for remainder of 2021