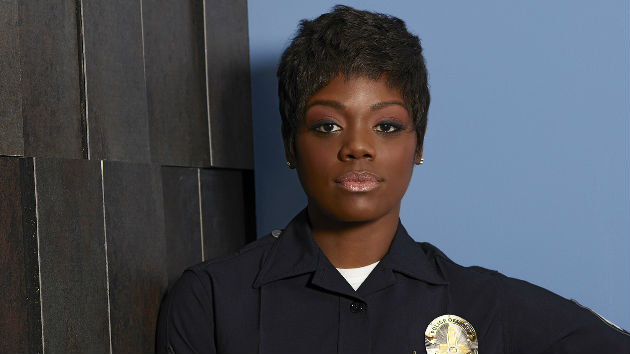 (LOS ANGELES) — The Rookie’s Afton Williamson, who announced on Sunday that she was leaving the show after she was allegedly subjected to sexual harassment and racial discrimination, has revealed the names of the alleged perpetrators.

“This season on The Rookie, I was sexually harassed by fellow actor Demetrius Grosse. I was Racially Bullied and Discriminated against and Sexually Assaulted by Hair Department Head Sally Nicole Ciganovich,” the 34-year-old actress wrote in a statement posted to her verified Instagram account on Monday.

Entertainment One, one of the studios behind the cop drama, along with ABC Studios, has an ongoing investigation into Williamson’s claims, an ABC spokesperson said in a statement Sunday.  On Monday, ABC Entertainment president Karey Burke, addressing Williamson’s claims at the network’s Television Critics Association event, said, “I don’t have a lot of answers. I wish I had more,” adding, “I learned alongside my colleagues at the end of June that there were allegations and an investigation had been launched by Entertainment One. I’m waiting for results of that investigation to get more answers.”

In a lengthy Instagram post on Sunday, Williamson claimed that throughout the filming of The Rookie’s pilot, she “experienced racial discrimination/racially charged inappropriate comments from the hair department.”

Williamson further alleged the treatment worsened when she was sexually harassed by a recurring guest star, bullied by executive producers and sexually assaulted by a crew member at a wrap party.

The actress, who is African American, also claimed she filed reports on the incidents with showrunner and executive producer Alexi Hawley, who is white, but they weren’t seriously investigated by the network or shared by Hawley with other producers.

“After my initial report of sexual harassment, I was assured that the actor would be fired,” said Williamson of the then-unnamed guest star. “I was also asked to film with him the very next day as a courtesy to the script, even though we had not begun filming the episode yet.”

Williamson went on to say Grosse wasn’t fired and that “I was even written in scenes with him.” She further claims after learning from “the Showrunner” that “the actor had not been fired nor had he gotten HR involved,” she was asked to return for season two. “I turned it down and I walked,” wrote Williamson.

Williamson played training officer Talia Bishop in The Rookie, opposite Nathan Fillion’s John Nolan. The show is slated to return for its second season September 29.

Cynthia Erivo salutes Michaela Coel on her historic Emmy win: “Proud is an understatement”
Gillian Anderson’s Emmy night: Yes, she’s American; no, she hasn’t spoken with long-dead Margaret Thatcher
Emmy celebs rock the rare red carpet with scene-stealing looks
Traveling over the holidays? Here’s how to stay safe from COVID-19
At least 43 people shot, six fatally, in violent Chicago weekend
‘Shang-Chi and the Legend of the Ten Rings’ three-peats at #1 with $21 million weekend