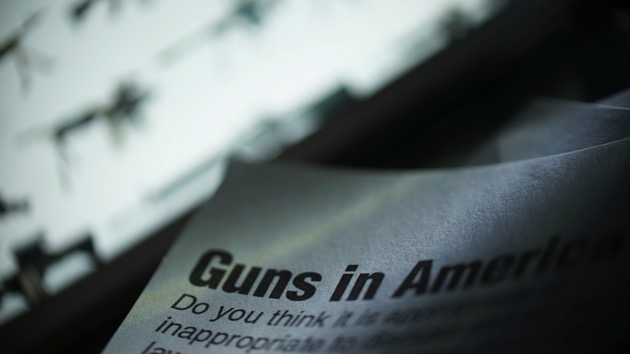 (COLUMBUS, Ohio) — Ohio Gov. Mike DeWine says he agrees with protesters who called on him to “do something” in the aftermath of the weekend’s mass shooting, so he’s doing just that.The Republican governor, who was sworn into office earlier this year, announced 17 measures Tuesday morning that he hopes will make changes in the wake of the mass shooting early Sunday in Dayton, where nine people were killed and dozens of others were injured.DeWine made his first comments about the shooting on Sunday just hours after the attack, but he was shouted down by hecklers who called on him to “do something!” In an address Tuesday morning, DeWine said that those who chanted “were absolutely right. We must do something and that is exactly what we’re going to do.”Among the initiatives that DeWine announced are the implementation of background checks and safety protection orders, as well as increased police training to identify potentially dangerous individuals, and tougher punishments for those who help others obtain guns.All of the initiatives are being proposed to the state legislature, which will have to approve them in order for the measures to become state law.”If we do these things, it will matter. If we do these things it will make us safer. Each one of these by themselves is not going to solve all of the problems, but I believe in my heart that each and every one of them will help … that each and every one of them will make this a better state and make this a stronger state,” DeWine said Tuesday.”We can do meaningful things to protect lives,” he said.The increased background checks for all gun sales in the state of Ohio would include exceptions for the transfer of firearms within families, DeWine said.The safety protection orders would allow family members or loved ones to prompt the issuance of orders that would take guns away from those who pose a danger and have access to guns. Police and sheriffs deputies would also be able “to activate the criminal justice system when they find an individual … who is a danger to themselves or who is a danger to others and has access to a gun,” DeWine said.Speaking about the proposed safety protection orders, DeWine stressed the role that due process would play in the proposed removal of guns from potentially dangerous individuals. Other states have similar regulations, which are sometimes called ‘red flag laws.’ DeWine said that such laws can not only protect the public from shootings, but also aid those who may be suicidal.”You’re going to eliminate some suicides by doing this,” DeWine said, adding that “sometimes these people are their own worst enemy.”Other initiatives include increased access to state psychiatric hospitals, increased access to mental health services, an anonymous school safety tip line, and a partnership with Sandy Hook Promise to train schools and community members to “know the signs” of a possible school shooter.DeWine also called for stricter punishment for people who purchase guns illegally and those who continue to possess and use guns when they are not legally allowed to do so.Copyright © 2019, ABC Radio. All rights reserved.