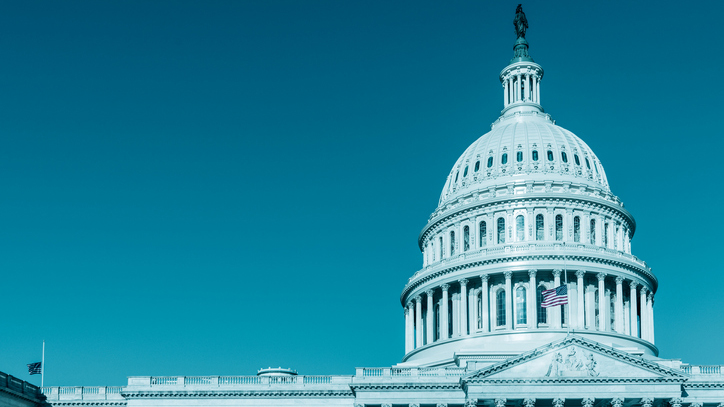 (WASHINGTON) — Amy McGrath, the most prominent Democrat vying to take on Majority Leader Mitch McConnell in the 2020 Kentucky Senate race, blasted the senator Monday for tweeting out an image of a mock graveyard with a tombstone bearing McGrath’s name just hours after a mass shooting in El Paso, Texas, where 22 people were killed and many more injured.”Hours after the El Paso shooting, Mitch McConnell proudly tweeted this photo. I find it so troubling that our politics have become so nasty and personal that the Senate Majority Leader thinks it’s appropriate to use imagery of the death of a political opponent (me) as messaging,” McGrath tweeted. “It’s symptomatic of what is wrong with our system. I’m fine with the ordinary rough and tumble of politics, but this strikes me as beyond the pale.”At 6:35 p.m. Saturday, McConnell’s Senate campaign account tweeted an image of a fake graveyard with tombstones, seemingly made from cardboard, that read “R.I.P” above various people and ideals that McConnell has defeated, so to speak, or plans to defeat. McConnell campaign yard signs are among the tombstones as well.There were tombstones for socialism, the Green New Deal, Merrick Garland, Alison Lundergan Grimes and McGrath, whose tombstone included the date of the 2020 election.The Green New Deal is a progressive-backed climate change resolution that failed to pass in the Senate when McConnell took it to the floor for a vote. Garland was nominated to the Supreme Court by former President Barack Obama in 2016, and McConnell refused to bring his nomination before the Senate floor for a hearing or vote, claiming that since it was an election year, the next president should decide who filled late Justice Antonin Scalia’s seat. McConnell defeated Lundergan Grimes in his bid for re-election in 2014. McConnell campaign manager Kevin Golden told ABC News via email, “Our supporters built an homage to the Courier Journal cartoon at Fancy Farm and we posted their work. Amy McGrath has tweeted this very cartoon several times and it’s shameful that she’s pretending not to know exactly what it is referencing in order to politicize a tragedy.””More lies from the McConnell camp,” Terry Sebastian of the McGrath campaign told ABC News in an email. “They are just trying to distract folks from the sick and ugly side of the campaign they’ve been running where they seem proud of calling themselves ‘Grim Reaper’ and ‘Cocaine Mitch’ and promotes images of a gravestone of his opponent. They are the worst of what politics has to offer.”Former Rep. Gabby Giffords — who was shot in a mass shooting in 2011 and now leads Giffords, an organization dedicated to fighting gun violence in America — issued a statement in response to McConnell’s tweet as well.”Threats, intimidation, and hate have no place in our society… I am appalled that in this divisive political climate—a climate where gun violence fueled by hate is on the rise—Mitch McConnell is joking about the death of his current and former opponents and a federal judge,” she wrote. “The nation is turning to Leader McConnell right now for leadership, and this is the furthest thing from it. Leader McConnell must apologize to Amy McGrath, Merrick Garland, and Alison Lundergan Grimes.”The photo was taken at the 139th annual Fancy Farm picnic, an event in the Kentucky community on the first Saturday of every August that features political speeches, barbecuing and boasts thousands of attendees. It’s also a fundraiser for St. Jerome Catholic Church.The original political cartoon, which was drawn by Joel Pett and published on July 12 in the Lexington (Kentucky) Herald Leader, featured McConnell with a shovel among various tombstones, including “heath care,” “campaign finance reform,” “coal miners” and several others.McConnell’s campaign tweeted out the cartoon, with the senator himself signing the tweet, writing, “Although I profoundly disagree with a few of these grave stones, this might be my all-time favorite cartoon of the over 600 in my career.”McGrath retweeted his post, writing, “Since Mitch McConnell went to Washington, (The Mine Safety and Health Administration) has found 21,000 instances of miners being exposed to toxins that cause black lung disease. Kentuckians are dying and here he is laughing about the destructive effects of his failures.”The former fighter pilot announced her bid to unseat McConnell, one of the most powerful politicians in Washington, in early June. She had previously made a name for herself as one of the many female veterans running for Congress for the first time in 2018. She lost her race against Rep. Andy Barr, the incumbent for Kentucky’s 6th Congressional District.