It’s a family-friendly story of Joseph and how he solved Egypt’s famine.

It’s told entirely through song! Each song is in a different style.

Tickets are $15. Shows next weekend as well.

Listen to the full interview with Joe Sensor, the music director of the play.

Sign Language Interpretation will be provided on Friday, August 9th by Jenny Gordon.

Joseph and the Amazing Technicolor Dreamcoat is being sponsored by Lucky Hawk, LLC and Jim Stellabuto’s Everything Under Foot.

Joseph and the Amazing Technicolor Dreamcoat with lyrics by Tim Rice and music by Andrew Lloyd Webber is a reimagining of the Biblical story of Joseph, his father Jacob, eleven brothers and the coat of many colors, and is one of the most enduring shows of all time.  Told entirely through song with the help of main character Narrators, the musical follows preferred son Joseph. After being sold into slavery by his brothers, he ingratiates himself with Egyptian noble Potiphar, but ends up in jail after refusing the amorous advances of Potiphar’s wife. While imprisoned, Joseph discovers his ability to interpret dreams, and he soon finds himself in front of the mighty but troubled, Elvis-inspired, Pharaoh. Joseph’s solution to Egypt’s famine elevates him to Pharaoh’s right-hand man and reunites him with his family.

The opening night gala, August 8th will feature samples from Presko in DuBois.  Come and enjoy the offerings prior to the performance, and during the show’s intermission.

Tickets for this show cost $15.

Tickets can be purchased online at www.ReitzTheater.com, at Ace Hardware in DuBois or by visiting the Reitz Theater Box Office, which opens one hour prior to each show, and is also open Mondays and Fridays from 10 am- 4 pm, and Wednesdays from 4 pm- 7 pm.  The box office will be closed from July 22nd through July 26.  Please call ahead (814-375-4274) to make special arrangements for handicapped seating, including ideal placement for viewing the sign language interpretation during the August 9th performance. The Reitz Theater is located at 36 East Scribner Avenue in DuBois. 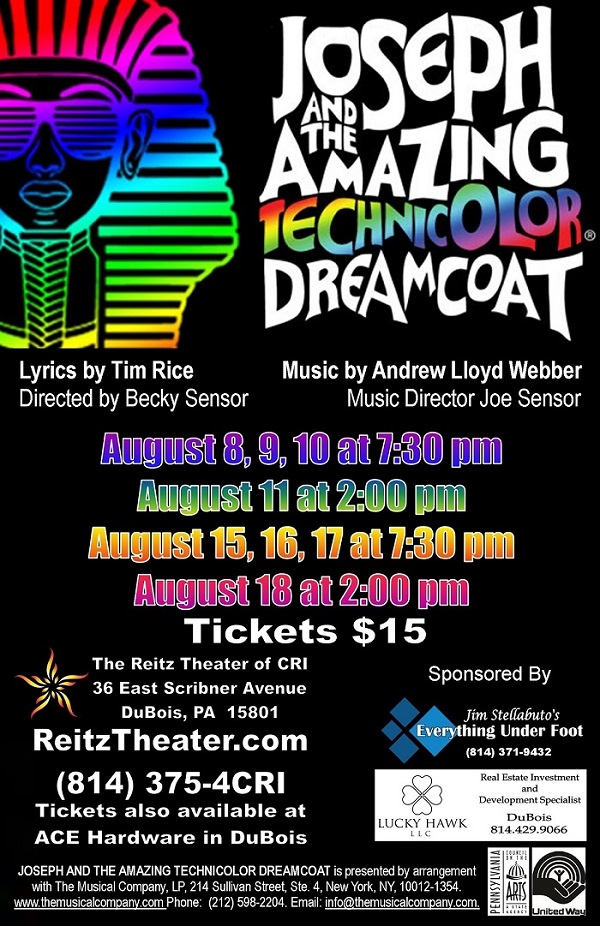