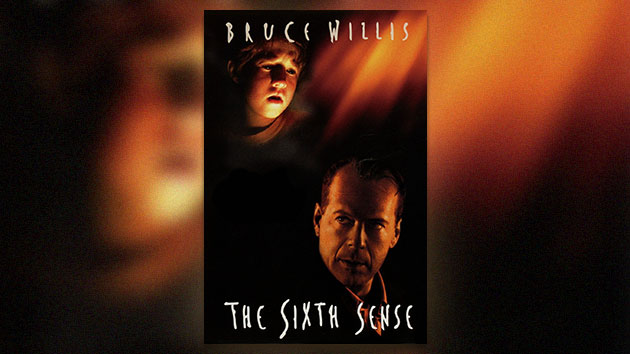 Made for $40 million, the film went on to earn $672 million worldwide, becoming the second-highest-grossing movie of the year in the U.S., after Star Wars: Episode I — The Phantom Menace, and stood as the highest-grossing horror film in history until it was surpassed in 2017 by It.

The Sixth Sense also made Hollywood history with one haunting line — “I see dead people” — and a mind-bending surprise ending.

Toni Collette’s character hires child psychologist Dr. Malcolm Crowe, played by Bruce Willis, to assess her troubled son, Cole, played by a then-10-year-old Haley Joel Osment, who’s being haunted by visions of the deceased.  Crowe helps Cole learn not to be afraid of the dead people he sees who, as they discover, are turning to Cole for help — after which it’s revealed that Willis’ character is one of those dead people, too. The Sixth Sense earned six Oscar nominations, including best supporting actress for Collette and best supporting actor for young Osment, as well as best picture, best director, and best screenplay nominations for Shyamalan.  It’s since become a supernatural movie classic. Shyamalan went on to write and direct the 2000 hit Unbreakable, again starring Bruce Willis and with Samuel L. Jackson, and Signs in 2002.  A series of high-profile box office misfires followed until Shyamalan got back to his more modestly budgeted thriller roots with 2017’s Split, starring James McAvoy, the twist ending of which revealed it to be a sequel to Unbreakable. The trilogy was completed with the 2018 hit Glass, which united Willis, Jackson and McAvoy.

Shyamalan’s next film is said to be the drama Labor of Love, rumored to star Bruce Willis, about a widower who walks across the country to demonstrate his love for his late wife.  So far, there’s no announced release date.

Emmys 2021: Gillian Anderson and Tobias Menzies win Supporting Actress and Actor in a Drama Series for ‘The Crown’
Pentagon’s drone strike acknowledgement was the correct response: Mullen
What we know about the Surfside condo collapse
Dolphins quarterback Tua Tagovailoa carted off the field
The FDA panel decision on vaccine boosters shows the process worked: Fauci
A family promise led her to Mount Cristo Rey, the site of a pilgrimage for those seeking a miracle