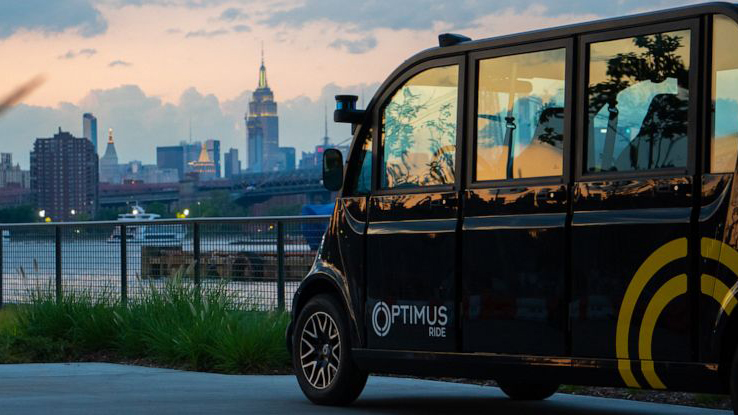 (NEW YORK) — Driverless cars are finally coming to New York. Sort of.Optimus Ride, a self-driving tech company, is launching a fleet of six cars at Brooklyn’s Navy Yard on Wednesday in a push to bring autonomous vehicles to the Empire State. It’s unclear though how “self-driving” they are: every car will have a safety driver and software operator on board.  The cars, which look like a cross between a London taxi and a shuttle bus, can fit up to four passengers at a time, a company spokesperson told ABC News. Two operators will sit in the front.”One is the safety operator behind the steering wheel and the other is the software operator in front passenger seat monitor,” according to the company.Passengers can ride the Optimus cars to and from a recently opened ferry landing in an enclosed space of the Brooklyn Navy Yard campus — far away from city traffic. The rides are free.”The system will run on a continuous loop between 7 a.m. and 10:30 p.m. on weekdays,” the company said in a press release. It expects to transport 500 passengers a day and more than 16,000 passengers a month.Optimus Rides was founded in 2015 by graduates from the Massachusetts Institute of Technology (MIT). It said it has provided more than 20,000 “autonomous” vehicle rides, mostly in the Boston area.The company recently announced plans to expand into additional states. In addition to Brooklyn, it will launch similar projects in California and just outside Washington, D.C. All of the test areas are geofenced campuses separated from city streets.The company could not give a specific time frame for when the vehicles would truly be autonomous.”There is no exact date of when the cars will operate without a safety driver, but it will be some time before Optimus Ride removes the safety operators,” a spokeswoman said.The promise of a future of self-driving cars seems to be constantly pushed further into the future.General Motors’ Cruise autonomous vehicle division had announced plans to start carrying passengers and goods without humans by the end of 2019. But the company is changing its timeline.“When you’re working on the large scale deployment of mission critical safety systems, the mindset of ‘move fast and break things’ certainly doesn’t cut it,” Cruise CEO Dan Ammann wrote in a post on Medium in July. “With such high stakes, our first deployment needs to be done right and we will only deploy when we can demonstrate that we will have a net positive impact on safety on our roads.”Ammann did not specify a date.Other traditional automakers are jockeying to get into the self-driving race, but so far everyone needs a human behind the wheel.Ford launched an autonomous driving experiment in Miami last year, in which it delivered Domino’s pizzas, but with a human driver.Tesla has come under scrutiny and is facing several lawsuits for accidents caused when its cars are in autopilot mode.

Britney Spears makes triumphant return to Instagram, but some fans think someone else is running the account
Biden to focus on ‘intensive diplomacy’ at UN amid tensions with allies
Republicans dig in on debt-limit standoff despite Democratic effort to mount pressure
Janelle Monae launches new Martell cognac “Soar Beyond the Expected” campaign
“Ugh! Don’t do that!” ‘Sopranos’ creator David Chase on how his crew hated series finale set to “Don’t Stop Believin'”
Could Jason Sudeikis return to ‘SNL’ as the first host of the new season?