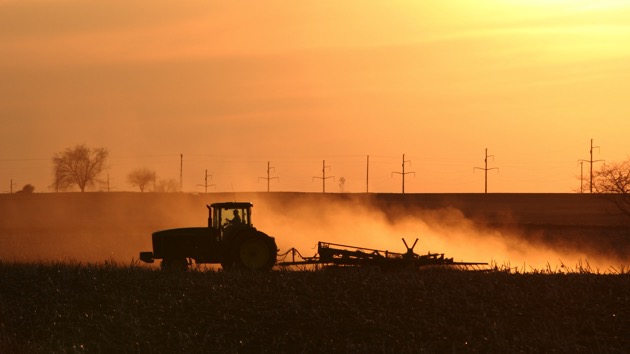 (WASHINGTON) — After steep losses on Monday, world markets wobbled through escalations in the U.S.-China trade war on Tuesday as the White House played down investor reaction to the U.S. labeling China a currency manipulator and pledged to further support hard-hit American farmers.”We’ve had a fabulous market, fabulous market,” National Economic Council Director Larry Kudlow told reporters at the White House Tuesday. “Agreed it was quite volatile yesterday. These things come and go.”The White House has repeatedly claimed Americans would be minimally impacted by tariffs, but economists say U.S. companies and consumers bear most, if not all, of the cost.The trade war has hurt American farmers particularly hard. China said on Monday it would not rule out imposing additional sanctions on agricultural imports from the United States and that Chinese companies have stopped purchasing farm produce, Chinese state news agency Xinhua reported.The Trump administration has previously pledged billions of dollars in financial assistance to those farmers, many of whom say they would prefer to make money through stabilized trade instead of government aid.”In the last 18 months alone, farm and ranch families have dealt with plunging commodity prices, awful weather and tariffs higher than we have seen in decades,” Zippy Duvall, the president of the Farm Bureau, a group that represents farmers, said in a statement.He called China halting agricultural purchases a “body blow to thousands of farmers and ranchers who are already struggling to get by.”Kudlow said the administration would continue to assist farmers “as much as we can” and would “help them more if need be.””Farmers have been great. They’re patriots. They’ve backed us 100 percent, God bless ’em,” Kudlow said. “We are helping them with assistance as much as we can. A lot of times the farmers, you know, don’t like the assistance, they’re hardy types, they’re old-time free-market work types. Sure we’re helping them as much as we can. We’ll help them more if need be.”Roger Johnson, president of the National Farmers Union, told Bloomberg News Trump’s strategy of antagonizing China has made things worse and farmers “can’t withstand this kind of pressure much longer.”U.S. stocks on Tuesday morning recovered some of their losses as China’s central bank indicated it wanted its currency to trade at a higher level against the dollar.On Monday, U.S. markets posted their biggest losses of the year — the Dow Jones Industrial average dropped 2.9 percent, the Nasdaq 3.5 percent, and the Standard & Poor’s 500 3 percent. The Trump administration dismissed the downturn as temporary.The Trump administration dismissed the downturn as temporary and U.S. stocks on Tuesday morning recovered some of their losses as China’s central bank indicated it wanted its currency to trade at a higher level against the dollar.But the United States’ decision to label China a currency manipulator — after President Donald Trump repeatedly accused China of devaluing its currency — drastically heightened tensions after months of trade negotiations. Trump has accused China of devaluing its currency since the day he took office.China’s central bank said the U.S. designation was a “capricious act of unilateralism and protectionism” that “will severely undermine international rules and have material impacts on the global economy and finance.”The move could result in additional penalties on China. Trump has already imposed tariffs on $250 billion worth of imports of China, and last week he announced he would slap tariffs on the remaining $300 billion worth of imports starting Sep. 1. Kudlow said Tuesday, though, that the next round of negotiations with China would still take place in the United States in early September, as planned.Copyright © 2019, ABC Radio. All rights reserved.