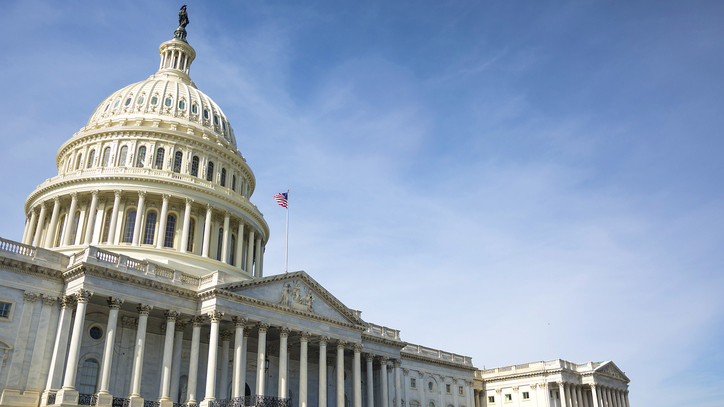 (WASHINGTON) — The top Democrats in Congress on Monday called on Senate Majority Leader Mitch McConnell to cancel the Senate’s August recess and return to work “immediately” to vote on gun background check legislation in the wake of two deadly mass shootings in Texas and Ohio.The House passed two background check bills in February but the Senate has so far failed to act.“In February, the new Democratic House Majority promptly did its duty and passed the Bipartisan Background Checks Act of 2019, which is supported by more than 90 percent of the American people and proven to save lives. However, Senate Republican Leader Mitch McConnell has called himself the ‘grim reaper’ and refuses to act on this bipartisan legislation. It is incumbent upon the Senate to come back into session to pass this legislation immediately,” Senate Minority Leader Chuck Schumer of New York and House Speaker Nancy Pelosi of California said in a joint statement Monday.McConnell sets the Senate floor schedule and has not called the two bills up for consideration.One of the bills would establish new background check requirements for firearm transfers between private parties. The other bill would extend the review period for the FBI to complete its background checks for gun purchases from three days to 10 days.President Donald Trump has threatened to veto both measures.The Democrats’ joint statement came just moments after Trump wrapped remarks in which he addressed the two fatal shootings.In those remarks, Trump condemned “white supremacy” and cited the threat of “racist hate.”“In one voice our nation must condemn racism, bigotry and white supremacy,” Trump said.But Trump did not propose any sort of broad gun control measures in his remarks, and instead called for stronger action to address mental illness, video games and violence in the media.“President Trump is literally making up causes of gun violence in America. America does not have more mental illness than other developed nations. We don’t have more violent video games. What we have is a hate machinery that President Trump feeds on an almost daily basis, and a country awash in guns and weak laws that allow young men contemplating violence to easily get their hands on a deadly weapon,” Sen. Chris Murphy, D-Conn., said in a statement Monday.Congress has not passed any sweeping gun reform legislation since the 1990s. Lawmakers have tried and failed numerous times, notably after the 2012 shootings in Newtown, Conn., in which 20 school children were killed by a gunman.While Congress has failed to reach a bipartisan consensus on broad gun control legislation and the House-passed background check bills lie waiting in the Senate, some senators are working on other legislation to address the gun violence epidemic.GOP Sen. Lindsey Graham, a top Trump ally, announced in a statement Monday that he and Democratic Sen. Richard Blumenthal of Connecticut had reached an agreement on a federal grant program that would assist states in implementing the “Red Flag” law.The state law typically permits police or family members to petition a state court to order the temporary removal of firearms from a person who may present a danger to others or themselves.Graham said he spoke to Trump Monday morning and said he seemed “very supportive” of the idea.Trump also spoke to another bipartisan duo on Monday – Sens. Pat Toomey, R- Penn., and Joe Manchin, D-W.Va., about a separate piece of legislation that would expand background checks for unlicensed gun show dealers and online sales.“This morning, we both separately discussed with President Trump our support for passing our bipartisan legislation to strengthen background checks to keep guns out of the hands of criminals, the dangerously mentally ill, and terrorists while respecting the Second Amendment rights of law-abiding gun owners and all Americans. The president showed a willingness to work with us on the issue of strengthening background checks,” Manchin said in a statement.Toomey said in a tweet it is “time for Congress to act.”McConnell, who fractured his shoulder Sunday morning in a fall outside his Louisville home, is unlikely to bring the Senate back into session to vote on the two House-passed bills.“It took less than three hours for the president to back off his call for stronger background check legislation. When he can’t talk about guns when he talks about gun violence, it shows the president remains prisoner to the gun lobby and the NRA,” Schumer and Pelosi said in their statement. “The public must weigh in and demand passage of this legislation for the safety of our children.”