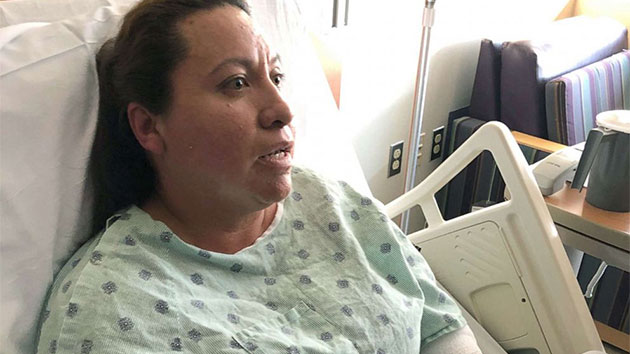 (EL PASO, TX) — Maribel Latín was shot twice in Saturday’s massacre in El Paso — yet she refuses to carry hate in her heart.

From her hospital bed, the soccer mom recounted the harrowing details of one of the deadliest mass shootings in U.S. history.

Twenty people were killed and 26 others were injured at an El Paso Walmart by suspected gunman Patrick Crusius, 21, hours after police say he may have posted a virulent anti-immigration screed online. Crusius, who was apprehended, is being held on capital murder charges.

On Saturday morning Latín was raising money for her daughter’s soccer team outside the Walmart when the gunman started firing.

“He shot at us, individually, trying to get us individually,” she told ABC News. “And then he came walking toward us to make sure we all got shot again and killed.”

“He shot eight more rounds, and all I could say was, ‘God, please take care of my children and please don’t let him do anything to [my daughter],’” Latín said.

“He was the calmest person ever,” she said of the gunman. “He didn’t say anything, just plain hatred and anger.”

The gunman shot Latín in her arm and foot while firing at others, including her friend Norma Coca’s daughter and son-in-law.

“The grandkids saw everything — the ladies dying, their parents getting shot,” Coca said.

“My mommy, my mommy got shot,” Coca said her 10-year-old granddaughter told her.

“The girls were crying, they were asking about their dads and their moms, and I knew where their dads were,” Latín recalled with tears in her eyes. Many of the other parents were shot as well, she said.

“They saw things that children their ages — no children in any world should see that,” Latín said.

And yet when asked what message she would send to the gunman, Latín was forgiving.

“You cannot cure hatred with hatred,” she said. “I want something good to come out of this.”