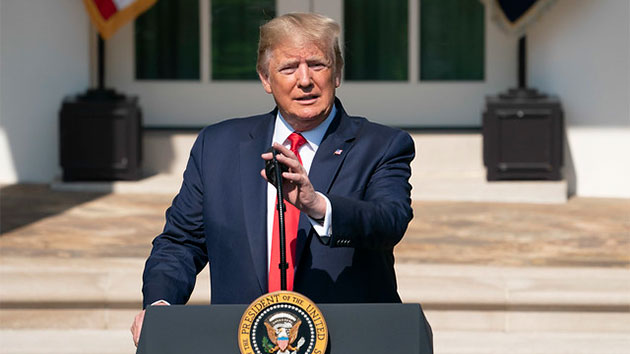 (WASHINGTON) — Authorities in Texas on Saturday said that the suspect in the El Paso shooting that left at least 20 people dead and dozens injured had told them he wanted to shoot as many Mexicans as possible. They are also examining what they believe to be a “manifesto” written by the shooter that shows a possible “nexus” to a hate crime.

Suspect Patrick Crusius’ alleged motive for the Saturday shooting at the Walmart in El Paso with an assault-style rifle has renewed focus on President Donald Trump’s messaging at rallies and on social media as it relates to Mexico and Mexican immigrants.

The president has denied responsibility for inciting violence in American communities in the past, despite an ABC News investigation in November 2018 finding multiple criminal cases involving mostly white men where Trump’s name or rhetoric was invoked in direct connection with violent acts, threats of violence or allegations of assault.

Trump has downplayed white nationalism in the past, saying during a March press conference that he doesn’t think it’s a rising threat around the world and that people who commit acts of violence in the name of white supremacy are “part of a small group of people that have very, very serious problems.”

During a rally in May in Panama City Beach, Florida, Trump spoke about the border patrol agents working to stop migrants from crossing the border illegally. When he asked the crowd, “How do you stop these people?” one rally attendee shouted, “Shoot them.” At first laughing, Trump responded, “That’s only in the [Florida] panhandle, can you get away with that statement.”

When asked in July whether he is concerned that his tweets about four Democratic congresswomen of color were seen as racist and that white nationalist groups are finding common cause with him, Trump said, “It doesn’t concern me because many people agree with me.”

Trump has described migrants from Central and South America, many of whom are seeking asylum from violence in their home countries, as criminals, gang members and rapists. But since as early as October last year, he’s repeatedly described their attempts to cross the U.S.-Mexico border as an “invasion.”

“Many Gang Members and some very bad people are mixed into the Caravan heading to our Southern Border. Please go back, you will not be admitted into the United States unless you go through the legal process,” Trump wrote on Twitter on Oct. 29, 2018. “This is an invasion of our Country and our Military is waiting for you!”

Many Gang Members and some very bad people are mixed into the Caravan heading to our Southern Border. Please go back, you will not be admitted into the United States unless you go through the legal process. This is an invasion of our Country and our Military is waiting for you!

In November, he tweeted that “the U.S. is ill-prepared for this invasion, and will not stand for it. [Migrants] are causing crime and big problems in Mexico. Go home!”

The Mayor of Tijuana, Mexico, just stated that “the City is ill-prepared to handle this many migrants, the backlog could last 6 months.” Likewise, the U.S. is ill-prepared for this invasion, and will not stand for it. They are causing crime and big problems in Mexico. Go home!

“I just got back [from the southern border] and it is a far worse situation than almost anyone would understand, an invasion!” he wrote in January.

Humanitarian Crisis at our Southern Border. I just got back and it is a far worse situation than almost anyone would understand, an invasion! I have been there numerous times – The Democrats, Cryin’ Chuck and Nancy don’t know how bad and dangerous it is for our ENTIRE COUNTRY….

In another tweet later in January, he said, “More troops being sent to the Southern Border to stop the attempted invasion of Illegals, through large Caravans, into our Country.”

More troops being sent to the Southern Border to stop the attempted Invasion of Illegals, through large Caravans, into our Country. We have stopped the previous Caravans, and we will stop these also. With a Wall it would be soooo much easier and less expensive. Being Built!

In June, the president wrote, “People have been saying for years that we should talk to Mexico. The problem is that Mexico is an ‘abuser’ of the United States, taking but never giving. It has been this way for decades.” He went on to say that Mexico must “stop the invasion of our Country by Drug Dealers, Cartels, Human Traffickers, Coyotes and Illegal Immigrants.”

….Coyotes and Illegal Immigrants, which they can do very easily, or our many companies and jobs that have been foolishly allowed to move South of the Border, will be brought back into the United States through taxation (Tariffs). America has had enough!

His most recent related tweet, in June, said, “We cannot allow all of these people to invade our Country. When somebody comes in, we must immediately, with no Judges or Court Cases, bring them back from where they came.”

We cannot allow all of these people to invade our Country. When somebody comes in, we must immediately, with no Judges or Court Cases, bring them back from where they came. Our system is a mockery to good immigration policy and Law and Order. Most children come without parents…

The president’s defenders said Trump shouldn’t be blamed for mass shootings, which have long-been a problem in the U.S. On Sunday, senior White House adviser Kellyanne Conway tweeted, “Finger-pointing, name-calling & screaming with your keyboards is easy, yet it solves not a single problem, saves not a single life.”

On ABC’s “This Week” on Sunday, acting White House Chief of Staff Mick Mulvaney also defended the president, saying the gunmen in this weekend’s shootings were “crazy people” who “should not be able to get guns,” and adding, “No politician is to blame for that.

But Democratic presidential candidates have come forward to condemn the president’s rhetoric and its potential influence on suspects of violence.

On Sunday, New Jersey Sen. Cory Booker wrote on Twitter, “When Donald Trump uses words like ‘infestation,’ ‘invasion’ and ‘s–thole countries’…when he refuses to condemn Neo-Nazis and white supremacists…Trump is giving license to this kind of violence. He’s responsible.”

Former Rep. Beto O’Rourke, whose hometown is El Paso, wrote that “President Trump’s racism does not just offend our sensibilities; it fundamentally changes the character of this country. And it leads to violence.”

Emmerson Buie Jr., the FBI special agent in charge in El Paso, said during a news conference Sunday that the Justice Department is seeking federal hate crime charges, as well as federal firearm and domestic terrorism charges against 21-year-old Crusius. He is already facing state capital murder charges and Texas will be seeking the death penalty, according to Buie.

The shooting occurred less than 14 hours before another suspect opened fire in Dayton, Ohio, killing at least nine and injuring dozens more. The suspect in that shooting, Connor Stephen Betts, was shot and killed “in less than a minute” after opening fire in the city’s crowded downtown area, Mayor Nan Whaley said Sunday morning on ABC’s “This Week.”