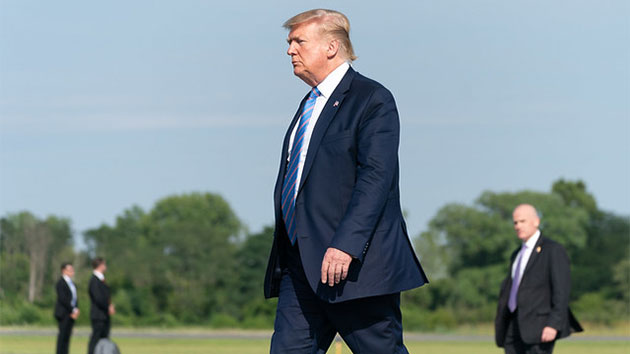 (WASHINGTON) — President Donald Trump offered his condolences on Sunday in the wake of the deadly mass shootings in El Paso, Texas, and Dayton, Ohio, saying “hate has no place in our country.”

“I want to extend our condolences to the people of El Paso, Texas, and Dayton, Ohio, incredible people who have been through a lot,” Trump said, standing beside first lady Melania Trump. “It was horrible but it could have been so much worse,” he added, noting the swift response of local law enforcement.

When asked by a reporter about how he plans to combat mass shootings, the president praised the work of his administration and seemed to point a finger at mental health issues. He appeared to ignore a separate question about white nationalism.

“We have done much more than most administrations, not talked about very much but we have done actually a lot,” Trump said. “But perhaps more has to be done.”

“This is also a mental illness, if you look at both of these cases, this is mental illness. These are really people that are very seriously mentally ill,” he said.

It was the first public appearance from the president, who did not address the public earlier this weekend while spending time at his private golf club in Bedminster, New Jersey. He did, however, responded to the shootings by tweeting a mix of condolences, politics and a tweet about UFC.

“Terrible shootings in ElPaso, Texas. Reports are very bad, many killed,” the president tweeted on Saturday afternoon, his first mention of the mass shooting. “Working with State and Local authorities, and Law Enforcement. Spoke to Governor to pledge total support of Federal Government. God be with you all!”

Terrible shootings in ElPaso, Texas. Reports are very bad, many killed. Working with State and Local authorities, and Law Enforcement. Spoke to Governor to pledge total support of Federal Government. God be with you all!

Minutes later, he wished UFC fighter Colby Covington good luck in his forthcoming fight. The president then shifted his focus to politics and began retweeting African American supporters who praised his policies.

On Sunday, the president seemed to refocus on the shootings.

‘We are prepared’: Law enforcement stresses readiness ahead of right-wing rally
McAuliffe, Youngkin spar over vision for commonwealth in first Va. gubernatorial debate
FDA panel recommends Pfizer boosters for people over 65 or high risk, votes ‘no’ for general population
Statue of Bitcoin founder honors mysterious ‘god’ of cryptocurrency
COVID-19 live updates: More than 10,000 new deaths reported in US in one week
Tyra Banks defends Olivia Jade ahead of her ‘Dancing with the Stars’ debut: “Olivia is so brave”