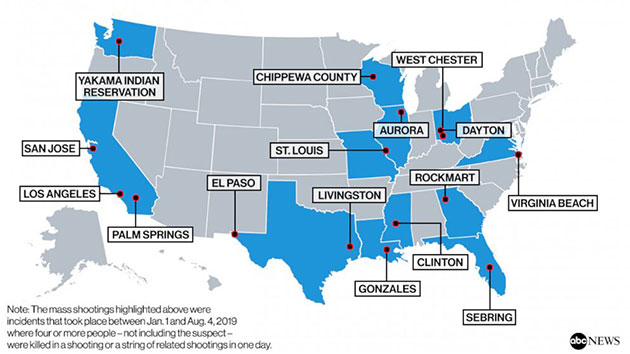 (NEW YORK) — Two mass shootings in the span of 14 hours over the weekend have left at least 29 victims dead.

The two shootings, first in El Paso, Texas, and then in Dayton, Ohio, are the latest instances of deadly mass shootings in 2019, bringing the total number of such incidents up to at least 17 — an average of one every 12.7 days this year.

The FBI doesn’t have an official definition of a mass shooting, but defines a mass killing as an incident in which three or more people, not including the suspect, are killed. Various groups and watchdog organizations keep their own lists, often using different criteria for what qualifies as a mass shooting. The Gun Violence Archive, for example, counts mass shootings as incidents in which four or more people were shot or killed, and by this criteria, Dayton is the 251st mass shooting this year.

For the list compiled by ABC News below, the incidents took place over the course of a day and involved four or more victims, not including the suspect, who died as a result of gunshot wounds. For instance, shooting sprees that spanned longer amounts of time were not included on this list.

Of the 17 deadly mass shootings that occurred so far in 2019, the first 10 took place through May. At that point, even though there had been more such incidents in the first five months of 2019 than in the same period in 2018, the number of fatalities was exactly the same: 51 victims killed.

Now, two months later and more than halfway through the year, the total number of victims has risen to 102 total victim fatalities.

Five people were killed when a gunman opened fire in a SunTrust Bank in Sebring, Florida, police said.

The 21-year-old suspect, Zephan Xaver, barricaded himself inside before later surrendering to authorities, police said.

“I have shot five people,” Xaver allegedly told 911 dispatchers, according to a joint statement released by the Highland County Sheriff’s Office and Sebring Police Department.

Xaver had been hired by Avon Park Correctional Institution on Nov. 2 and was training to be a correctional officer when he resigned on Jan. 9, according to the Florida Department of Corrections. Xaver had no disciplinary incidents while employed with the department.

2. Jan. 24: Shooting in Georgia before suspect flees the state, 4 victims

After allegedly shooting three people at two scenes in Rockmart, Georgia, a suspect was later found and taken into custody in Indiana.

At the first scene, 27-year-old suspect Daylon Delon Gamble allegedly shot three people, two of whom died, and then went to another scene and shot and killed two others, according to the Georgia Bureau of Investigations.

An “armed and dangerous” 21-year-old man from Louisiana who allegedly fatally shot his parents, girlfriend, her father and her brother, was captured outside his grandmother’s house in Virginia, authorities said.

Dakota Theriot was wanted on multiple counts of first-degree murder, home invasion and weapons charges stemming from a killing spree that began in Livingston Parish, Louisiana — just east of the state capital, Baton Rouge — and continued at his parents’ trailer in Ascension Parish.

“He was very sleep deprived,” Richmond County Sheriff Steve Smith told ABC News. “Once put in our booking room, he went straight to sleep… he seemed a little disoriented.”

A suspect was apprehended days after the shooting deaths of three teenagers and a man in the Palm Springs area.

The Desert Sun newspaper published a timeline surrounding the shootings, which states that at least two of the victims had been talking about a robbery plot earlier in the day of the shooting, and then they and a friend were found dead later at a trail, with the 4th victim found later on that day.

A 15-month-old girl, the child’s parents and the child’s grandparents were all found dead on a property in Polk County.

The toddler, Ranley Horn, was found outside near her mother Ashley Horn, 27, and Ashley’s grandmother, Linda Delaney, 72.

Inside the home, investigators found Linda’s husband Carlos Danley, 74, and Randy Horn, 54, who is also a relative.

No suspect was ever arrested, though the sheriff’s office confirmed that they are not actively looking for a suspect, implying but not directly stating that the case was considered a murder-suicide. It is not immediately clear and has not been released publicly who investigators believe was the suspect in the shooting.

6. Feb. 15: Shooting at a manufacturing plant in Illinois: 5 victims

Five victims were killed and five police officers were injured by gunfire in Aurora, Illinois, when an apparently disgruntled employee at an industrial warehouse opened fire after being told he was being fired from the job where he had worked for 15 years, according to authorities.

The gunman, identified as Gary Martin, 45, was killed by responding police officers, according to Aurora Police Chief Kristen Ziman.

The shooting unfolded at the Henry Pratt Company in Aurora, a town about 40 miles west of Chicago.

Police used a battering ram to force themselves into a home in Clinton, Mississippi, after responding to a call about a domestic disturbance, The Associated Press reported.

When they entered the home, police found four dead victims and the suspect, Nam Le, wounded. The suspect later died after being transported to a local hospital.

Le fired upon officers when they arrived at the home, leading to a standoff. The AP reported that two small children were released unharmed from the home during the standoff, and the relationship between the suspect and his victims, who ranged in age from 28 years old to 65 years old, was not immediately released.

Four relatives were found shot dead inside an apartment in West Chester, Ohio. The investigation into the shooting is ongoing, but police have told local reporters that it is being classified as a homicide.

The victims were identified by police as the apartment owners Hakiakat Singh Pannag, 59, his wife Parmjit Kaur, 62, their daughter Shalinderkit Kaur, 39, and Parmjit Kaur’s sister Amarjit Kaur, 58, according to The Journal-News.

Police responded to the scene after receiving a call from Shalinderkit Kaur’s husband, Gurpeet Singh, who called 911 after finding the bloody scene, according to The Cincinnati Enquirer.

A brawl inside a St. Louis home reportedly led to a gun battle where five victims in their 20s and 30s were shot, according to the St. Louis Post-Dispatch.

Of those, three victims were found dead at the scene and the fourth died later as a result of their injuries, the newspaper reported.

Initial reports suggested that the four deceased men were related.

The home where the shooting occurred is reportedly in a part of town called Hayden’s Rectangle, which the newspaper said is an area that has been the focus of crime fighting efforts in the past.

The shooting at a municipal building in Virginia Beach was the deadliest of the year in 2019, with 12 victims meeting their end.

The specific motive of the suspect, who was believed to be a disgruntled employee, remains unknown at this time as police continue to investigate the shooting.

The suspect, DeWayne Craddock, allegedly used two .45-caliber pistols in the rampage and law enforcement officials reported that both guns were purchased legally by the suspect.

The shooting took place on the Native American Yakama Indian Reservation in central Washington and a motive was not immediately clear, according to local newspaper The Spokesman-Review. Two suspects, both of whom were members of the Confederated Bands and Tribes of the Yakama Nation, were named and charged in the shootings.

The Spokesman-Review details how the pair shot and killed four people at one property as part of an apparent robbery and a fifth victim was found in a car that the pair had stolen to escape.

Police investigated a quadruple murder-suicide in San Jose after a man fatally shot three women and a man before killing himself.

The San Jose Mercury News reported that police believed the shooting was tied to a family conflicts.

A neighbor of the shooter, 66, said that the suspect’s wife jumped the fence from their home and ran into the neighbor’s home.

13. July 6: Shooting at an apartment building in St Louis, 5 victims

Five people were found shot dead in a St. Louis apartment building and the motive and suspect were not immediately clear.

The St. Louis Post Dispatch reports that a sixth person was with the group on Friday night before leaving, and when that person returned at around noon on Saturday, they found the group fatally shot.

The victims range in age between 37 and 65 years old, the paper reported.

A man was apprehended in connection to a shooting spree that left four dead over the course of a day in California’s San Fernando Valley.

The fourth fatality came several hours later when the suspect allegedly fatally shot a person on the public bus.

The motive was not immediately clear but sources have suggested that the suspect had prior issues with his family.

A 911 call led officials from the Chippewa County Sheriff’s Department to a residence where they found two dead adults who had been killed as a result of gunshot wounds.

Officials then went to the residence of one of those two victims, where they found three other victims. Law enforcement officials have ruled that the scene with three vicitms was a homicide scene, and the other scene was a murder-homicide. There was a total of five fatalities, but authorities believe that one was that of the perpetrator, though they did not immediately release the names or ages of those involved.

The sheriff sent out a press release the day after the discovery of the bodies and said that the public was not in harm’s way.

The suspect who opened fire at an El Paso Walmart was identified by authorities as Patrick Crusius, 21, of Allen, Texas, and he was “taken into custody without incident” and without any law enforcement officers firing their weapons, according to El Paso Police Department Sgt. Robert Gomez. He later told investigators he wanted to shoot as many Mexicans as possible, two law enforcement officials told ABC News.

Wounded victims ranged in age from 2 to 82.

Officials also said an assault-style rifle, similar to an AK-47, was secured at the scene along with several magazines.

El Paso police chief Greg Allen said during a news conference Saturday night that at least 20 people had died and 26 more had been injured. Allen said authorities are examining what he called a “manifesto” that they believe was written by the shooter and shows a possible “nexus” to a hate crime.

The second mass shooting in a span of less than 14 hours, at least nine people were killed and more than two dozen were wounded early on Sunday after a suspect opened fire in downtown Dayton, Ohio, according to police.

The suspected shooter was shot and killed by responding officers “in less than a minute” after opening fire, Mayor Nan Whaley said at a Sunday morning press conference. Police said they were only aware of one shooter.

Authorities responded quickly to the shooting, first reported at 1 a.m., and said police are regularly present in the crowded district popular with tourists and locals.