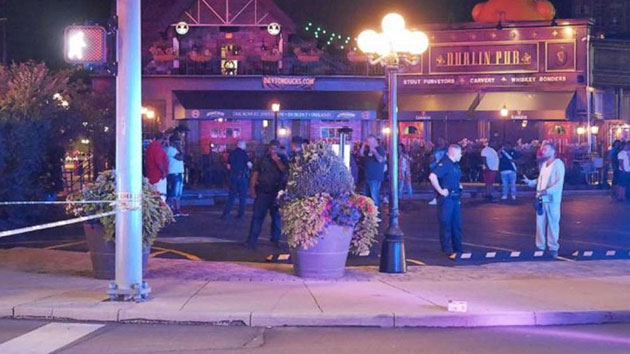 (DAYTON, Ohio) — In the second mass shooting in less than 14 hours, at least nine people are dead and more than two dozen wounded after someone opened fire in downtown Dayton, Ohio, early Sunday, according to police.In addition, the suspected shooter was shot and killed by responding officers “in less than a minute” of opening fire, Mayor Nan Whaley said at a Sunday morning press conference. Police said they were only aware of one shooter.Authorities responded quickly to the shooting, first reported at 1 a.m., and said police are regularly present in the crowded district popular with tourists and locals.Whaley said the shooter was carrying a .223-caliber rifle, wore armor and had additional high-capacity magazines with him.The shooting could’ve been much worse, according to Whaley, as “thousands of people” were in the Oregon District at the time, “enjoying their Saturday evening.”Miami Valley Hospital spokesperson Terrea Little told ABC News they received 16 victims from the shooting in the Oregon District. She did not provide further information on their injuries.Three victims have been admitted to the hospital, eight were treated and released, and five others remain under observation, Little said.”Most of us can’t get to our cars because there are bodies scattered all over across the street from our cars,” an eyewitness told Dayton ABC affiliate WKEF-TV. “People that were shot, hit, innocent people — we can’t get home to our families now, and those people aren’t going home to their families either.”The shooting took place in Dayton’s Oregon District, a collection of bars, restaurants and local businesses in the city’s downtown. The entire shooting took place outside, police said.The suspect was using a “long gun,” according to police.”I’m heartbroken,” Whaley tweeted Sunday morning. “Thank you to our first responders for all that you’ve done. We will share updates as we have more information.”Whaley said she received several calls from across the country as Dayton, Ohio, has become the scene of the 250th mass shooting in the country.In addition to local police, the FBI is on scene assisting with the investigation.The Dayton Police Department said in a tweet just after 3 a.m. they were “actively investigating an active shooter incident in the #OregonDistrict. Please avoid the area.””This is a large scene and investigation. Thank you for your patience,” Dayton police added in a subsequent tweet.Two bars in the Oregon District — Hole in the Wall and Ned Peppers — wrote on Instagram that their staff was safe.Kettering Health Network, which operates eight hospitals in the Dayton and Cincinnati areas, said it was treating patients, but offered no specifics.The shooting comes just 14 hours after a gunman killed 20 people and injured more than two dozen more at a Walmart in El Paso, Texas. The shooting was the eighth-deadliest in modern U.S. history. Five of the top 10 deadliest shooting in U.S. history have come since 2016.The pope, delivering his Sunday mass, referenced the three shootings in Gilroy, El Paso and Dayton, asking worshipers “to join my prayer for the people who lost their lives, the injured and their family members.””I am spiritually close to the victims of the episodes of violence that have bloodied Texas, California and Ohio, in the United States, striking defenseless people,” Pope Francis said.Copyright © 2019, ABC Radio. All rights reserved.