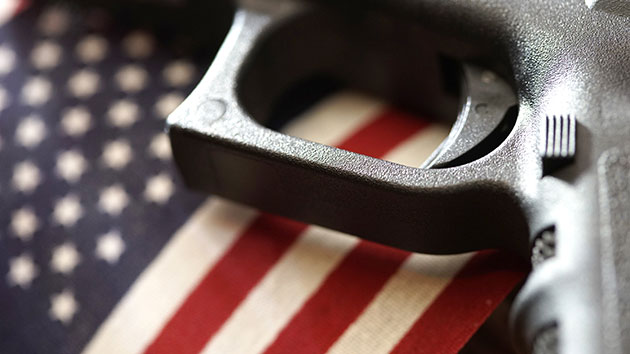 (EL PASO, Texas) — Two mass shootings in El Paso, Texas, and Dayton, Ohio, took the lives of 29 people collectively, injuring over 50 others, within 15 hours of each other over the weekend.The gun laws in Texas and Ohio are relatively lax, with both states allowing concealed carry, among other less restrictive laws.Both states are “shall-issue” states, meaning that local law enforcement cannot deny an applicant a permit if the applicant passes the basic requirements set out by state law, which for Ohio and Texas includes being at least 21 years old and not having pending criminal charges, among other requirements. Currently, there are 41 shall-issue states in the United States.In Ohio, permits are issued at the county level by the county sheriff in the applicant’s county of residence. In Texas, permits are issued at the state level by the Department of Public Safety.There is also no permit, background check or firearms registration required when buying a handgun from a private individual in either Texas or Ohio.In Texas, you must have a Texas license to carry or a concealed carry license/permit from a state with reciprocity, meaning from another state that also allows concealed carry permits, and the permits are issued to both residents and non-residents. An applicant must take a four- to six-hour training course as well as pass both a written exam and a shooting proficiency demonstration.A number of factors may make individuals ineligible to obtain a license in Texas, including felony convictions and some misdemeanor convictions, including charges that resulted in probation or deferred adjudication, certain pending criminal charges, chemical or alcohol addiction, certain types of psychological diagnoses, and protective or restraining orders.According to Ohio’s gun laws, residents 21 years and older can obtain an Ohio concealed handgun license after completing an eight-hour training firearms training. Residents who want to obtain a concealed handgun license cannot be an unlawful user of, or addicted to, any controlled substance, a fugitive from justice or prohibited by federal law from possessing a firearm. Applicants must be able to pass a National Instant Criminal Background Check System (NICS) criminal background check.Both states have no limit for handgun magazine capacity and no mandatory waiting period for handgun purchases.In the El Paso mass shooting that killed 20 people at a Walmart, officials said an assault-style rifle, similar to an AK-47, was secured at the scene, along with several magazines.In the Dayton mass shooting that killed nine individuals, officials said the shooter used a .223 high-capacity gun and had additional magazines with him.Copyright © 2019, ABC Radio. All rights reserved.

Murdaugh murders and mysteries timeline: Key events in the South Carolina family’s scandals and deaths
Alaska once had the highest vaccination rate. Now it’s in a COVID-19 crisis.
In theaters now: Gerard Butler and Frank Grillo in the “irreverent, explosive” ‘COPSHOP’
How COVID-19 hybrid immunity could be a potential pandemic game-changer
These vaccine mandates are already in place to attend school in the US
COVID-19 live updates: US reports highest daily death toll in nearly 7 months